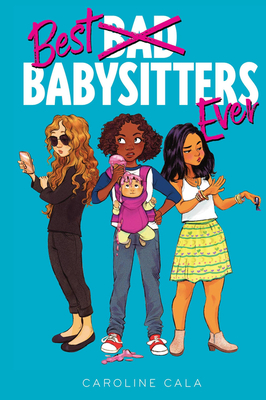 By Caroline Cala
$13.99
On Our Shelves Now - Please allow up to 48-hours for Curbside Pickup orders to be processed.

A funny new middle grade series about three 12-year-old best friends who start a babysitting club in their small California town. Perfect for fans of series like Whatever After and the Dork Diaries.

Once upon a time, a girl named Kristy Thomas had a great idea: to form The Baby-Sitters Club with her best friends. And now twelve-year-old Malia Twiggs has had a great idea too. Technically, she had Kristy’s idea. (And technically, little kids seem gross and annoying, but a paycheck is a paycheck). After a little convincing, Malia and her friends Dot and Bree start a babysitting club to earn funds for an epic birthday bash. But babysitting definitely isn’t what they thought it would be.

Caroline Cala is a writer and editor residing in Brooklyn. She has worked as a book editor and as a ghostwriter on a number of books by notable people. Her work has appeared in Vogue, ELLE, Refinery29, and others. Best Babysitters Ever is her middle grade debut. Visit her on Instagram @CarolineCala.

"From the start of this debut novel, Cala flexes her prodigious comedic muscles, managing to render the three friends both as sympathetic heroines and as the victims of lives more humorous than they would like.... They may never get another babysitting gig, but you’re hooked on their story for life."--New York Times Book Review

"Thanks to witty banter, ample humor and excellent characterization, readers will enjoy following this group of young dreamers as they attempt to gain some independence in their preteen lives."--Kirkus

"A breezy, entertaining read, this book and the promised sequels seem likely to fill a role similar to the original—as reading material kids choose for themselves."--The Horn Book Magazine

"Fans of the Baby-Sitters Club books are a natural fit for this debut novel about three enterprising girls....Cala incorporates themes of sibling rivalry, jealousy, competition, friendship, manipulation, entrepreneurship, and first crushes into this realistic series starter."--Booklist

"In her middle grade debut, Cala artfully uses humorous banter to paint the dissimilar friends’ realistic relationships as well as their bumbling efforts to vocalize their feelings and advocate for themselves.... An appealing, humor-filled update to a classic series."--Publishers Weekly

"Even readers who have never had the pleasure of hanging out with the BC girls of yore will find Malia, Bree, and Dot all likable in their distinct ways, and they’ll appreciate the book’s mix of snark and heart."--BCCB