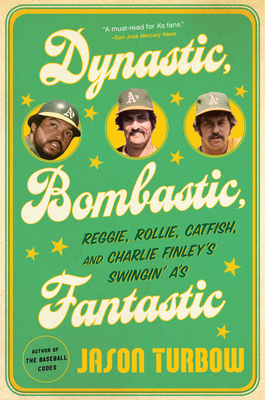 By Jason Turbow
$15.99
In Stock Now - Click Title to See Store Inventory. Please allow up to 48-hours for Curbside Pickup orders to be processed.

“An exciting and engrossing book with stories that are worth telling. This work will engage fans of Charlie O. Finley and the Oakland Athletics, along with anyone captivated by baseball history.” — Library Journal, starred review

The Oakland A’s of the early 1970s: Never before had an entire organization so collectively traumatized baseball’s establishment with its outlandish behavior and business decisions. The high drama that played out on the field—five straight division titles and three straight championships—was exceeded only by the drama in the clubhouse and front office.
Under the visionary leadership of owner Charles O. Finley, the team assembled such luminary figures as Reggie Jackson, Catfish Hunter, Rollie Fingers, and Vida Blue, and with garish uniforms and revolutionary facial hair, knocked baseball into the modern age. Finley’s insatiable need for control—he was his own general manager and dictated everything from the ballpark organist’s playlist to the menu for the media lounge—made him ill-suited for the advent of free agency. Within two years, his dynasty was lost.
A sprawling, brawling history of one of the game’s most unforgettable teams, Dynastic, Bombastic, Fantastic is a paean to the sport’s most turbulent, magical team, during one of major league baseball’s most turbulent, magical times.

JASON TURBOW is the author of the best-selling The Baseball Codes: Beanballs, Sign Stealing & Bench-Clearing Brawls: The Unwritten Rules of America’s Pastime and Dynastic, Bombastic, Fantastic. He has written for the New York Times, the Wall Street Journal, and SI.com. He lives in California.

"Dynastic, Bombastic, Fantastic masterfully recounts a thrilling period in Oakland A’s history.  Jason’s storytelling vividly captures the cast of characters that made up the Athletics of the 70’s, starting with their ringleader, Charlie Finley.  The stories of those memorable teams come to life in the pages of this fascinating book." – Billy Beane, executive vice president of baseball operations, Oakland A’s

“Not to be believed, and yet 100 percent true – this is Jason Turbow’s colorful, hilarious, and impossible-to-put-down account of the Swingin’ A’s, from their tyrannical, unhinged, and wildly innovative owner to the brawling players whose locker-room dysfunction fueled one of baseball’s greatest dynasties.” –Steve Fainaru, senior writer for ESPN and author of League of Denial

“Full of great characters, from Finley to Reggie to Catfish, this rollicking look at some of the most entertaining teams in baseball history is a must-read for any fan of the sport. Jason Turbow's passion, and love for the game, comes through.” –Chris Ballard, Sports Illustrated senior writer and author of One Shot at Forever

"The history of a fascinating franchise during professional baseball's colorful 1970s era . . . The narrative benefits immensely from Turbow's many interviews with the long-retired players from the Athletics' dominant stretch . . . A pleasing slice of baseball nostalgia that offers relevance to today's game." – Kirkus Reviews

“Turbow captures that glorious time period, brilliantly weaving fascinating tales of the team's colorful cast of characters while offering a behind-the-scenes look at a great time in sports history . . . Turbow vividly captures the ups and downs of his team through interviews with former players. VERDICT An exciting and engrossing book with stories that are worth telling. This work will engage fans of Charlie O. Finley and the Oakland Athletics, along with anyone captivated by baseball history.” – Library Journal, starred review

"Offers a chance to relive a period of outlandish moments in America’s pastime.” – Publishers Weekly

"Just enough tidbits . . . to give the book some pop. Entertaining reading for fans whose interest in baseball history extends back 40 years." – Booklist

"The read of the season." – BookPage