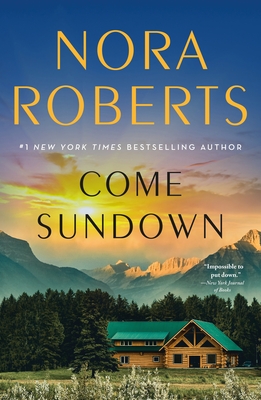 Come Sundown named as one of Whoopi Goldberg's "Favorite Summer Reads" on ABC's The View and one of New York Post's biggest blockbuster "Whizbang Books" of the summer.

A novel of suspense, family ties, and twisted passions from Nora Roberts, the #1 New York Times bestselling author of The Obsession...

The Bodine ranch and resort in western Montana is a family business, an idyllic spot for vacationers. A little over thirty thousand acres and home to four generations, it’s kept running by Bodine Longbow with the help of a large staff, including new hire Callen Skinner. There was another member of the family once: Bodine’s aunt, Alice, who ran off before Bodine was born. She never returned, and the Longbows don’t talk about her much. The younger ones, who never met her, quietly presume she’s dead. But she isn’t. She is not far away, part of a new family, one she never chose—and her mind has been shattered…

When a bartender leaves the resort late one night, and Bo and Cal discover her battered body in the snow, it’s the first sign that danger lurks in the mountains that surround them. The police suspect Cal, but Bo finds herself trusting him—and turning to him as another woman is murdered and the Longbows are stunned by Alice’s sudden reappearance. The twisted story she has to tell about the past—and the threat that follows in her wake—will test the bonds of this strong family, and thrust Bodine into a darkness she could never have imagined.

NORA ROBERTS is the #1 New York Times bestselling author of more than 230 novels, including Legacy, The Awakening, Hideaway, Under Currents, The Chronicles of The One trilogy, and many more. She is also the author of the bestselling In Death series written under the pen name J.D. Robb. There are more than 500 million copies of her books in print.

“Roberts always tells a good story that balances romance and suspense, but in this title, the narrative is deeper, the mystery is more layered, and with Alice, Roberts moves into another level of exploring physical and emotional trauma and the powerful balm of family and love. [Roberts] is moving into more complex and darker storytelling, to terrific effect.” --Kirkus Starred Review

"With its take-no-guff heroine, who understands the importance of family and friends, and a compelling plot peppered with domestic details and composed of equal measures of spine-tingling suspense and sexy romance, this is quintessential Roberts."--Booklist Rave Review

“What makes this novel most engaging is Roberts’s ability to suffuse her story with rich details of one family’s life, as well as sizzling doses of romance and mystery.”--Publishers Weekly