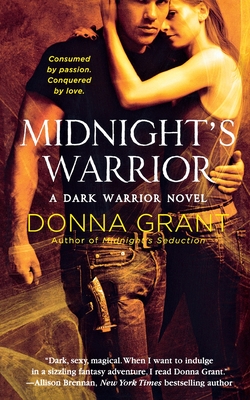 This is book number 4 in the Dark Warriors series.

Defenders against evil. Bound by the gods. The Dark Warriors are taking their battle from ancient Scotland to the modern world—where a woman's love can set them free…

A HEART IN HIDING

For ten long years, Tara has been a woman on the run, hiding from the magic-wielding Warriors and Druids of modern-day Scotland. Now, as a tour guide at a remote Highland castle, she hopes to finally escape her past—until one impossibly gorgeous man enters her life…and exposes her wildest secrets.

A WARRIOR IN LOVE

For centuries, Ramsey MacDonald has concealed his strength and skill as part Warrior, part Druid, for fear of unleashing the full force of his power. But when he takes Tara into his arms—and seals their fate with a kiss—Ramsey will have to fight for her love…though it may mean losing control of the magic inside him.

New York Times and USA Today bestselling author Donna Grant has been praised for her “totally addictive” and “unique and sensual” stories. She’s written more than thirty novels spanning multiple genres of romance including the bestselling Dark King stories, Dark Craving, Night’s Awakening, and Dawn’s Desire. Her acclaimed series, Dark Warriors, feature a thrilling combination of Druids, primeval gods, and immortal Highlanders who are dark, dangerous, and irresistible. She lives with her two children, a dog, and four cats in Texas.

"Dark, sexy, magical. When I want to indulge in a sizzling fantasy adventure, I read Donna Grant."