All the Devils Are Here: A Novel (Chief Inspector Gamache Novel #16) (Mass Market) 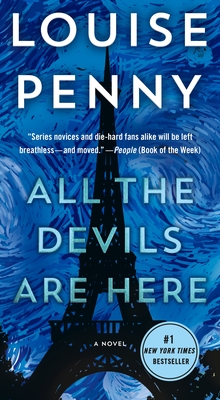 This is book number 16 in the Chief Inspector Gamache Novel series.

All the Devils Are Here, the 16th novel by #1 bestselling author Louise Penny finds Chief Inspector Armand Gamache of the Sûreté du Quebec investigating a sinister plot in the City of Light

On their first night in Paris, the Gamaches gather as a family for a bistro dinner with Armand’s godfather, the billionaire Stephen Horowitz. Walking home together after the meal, they watch in horror as Stephen is knocked down and critically injured in what Gamache knows is no accident, but a deliberate attempt on the elderly man’s life.

When a strange key is found in Stephen’s possession it sends Armand, his wife Reine-Marie, and his former second-in-command at the Sûreté, Jean-Guy Beauvoir, from the top of the Tour d’Eiffel, to the bowels of the Paris Archives, from luxury hotels to odd, coded, works of art.

It sends them deep into the secrets Armand’s godfather has kept for decades.

A gruesome discovery in Stephen’s Paris apartment makes it clear the secrets are more rancid, the danger far greater and more imminent, than they realized.

Soon the whole family is caught up in a web of lies and deceit. In order to find the truth, Gamache will have to decide whether he can trust his friends, his colleagues, his instincts, his own past. His own family.

For even the City of Light casts long shadows. And in that darkness devils hide.

Praise for All the Devils Are Here

“Although Penny touches on a wide range of subjects in this expansive story, her main concern is with the sacrifices we make for those we love. Here, even the loving relationship between Gamache and his son, Daniel, is challenged. If you think about it, the underlying theme of all of Penny’s books is Honor Thy Family — the one you were born with, the one you’ve acquired during your lifetime and the Family of Man.” —The New York Times Book Review

“Penny excels at capturing the inner life, whether it’s a criminal’s or a resentful child’s. Series novices and die-hard fans alike will be left breathless—and moved.”
—People Magazine (Book of the Week)

“Armand Gamache seems as much a spiritual warrior as a homicide detective… What stays with the reader are the tender passages, the human insights, the reminders of what makes life worth living.”
—Wall Street Journal

“You don't need to have read the previous books to enjoy the mystery (whose apt title refers to a line from Shakespeare's The Tempest: ‘Hell is empty and all the devils are here’), but knowing a bit about the characters’ backgrounds helps you follow the subtle tensions between them."
—AARP The Magazine

“Penny excels at creating a sense of place, and she brings Paris to life with scenes small (a favorite garden at the Rodin museum) and big (the top of the Eiffel Tower). We walk — or, when necessary, run — through the streets of Paris, taste lemon tarts and mourn the fire damage to Notre Dame.”
—St. Louis Post Dispatch

“Penny’s books are always a cause for celebration, and this one is superb in every regard.”
—Booklist (Top Review)

“Penny's series has always been about the complexities and sustaining glories of family, and here she takes that theme even further, revealing fissures in the Gamache clan, but also showing the resilience and love at its root. Series devotees will revel in both Penny's evocation of Paris—every bit as sumptuous as her rendering of Three Pines—and in the increased role she allots to librarian Reine-Marie, whose research skills are crucial to untying the Gordian knot at the mystery's core.”
—Booklist (starred)

“As always, Penny's mystery is meticulously constructed and reveals hard truths about the hidden workings of the world—as well as the workings of the Gamache family. But there's plenty of local color, too, with a trip to the top of the Eiffel Tower to escape surveillance and a luxurious suite at the Hotel George V for good measure. If you're new to Penny's world, this would be a great place to jump in. Then go back and start the series from the beginning.”
—Kirkus Reviews (starred)

"The strengths of this latest procedural from the inimitable Penny will attract her longtime fans and also draw in new admirers. A deft touch with plotting, sensitive characterization, and the author’s warmth and humanity make this a must-have mystery, especially for collections owning the rest of series.”
—Library Journal (starred)