Cape May: A Novel (Hardcover) 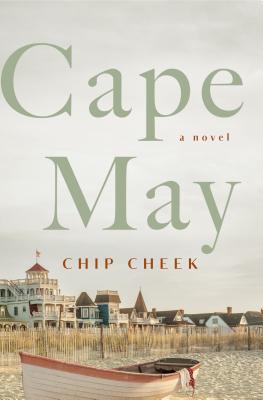 “Inside this mesmerizing tale of sexual desire and discovery, naive newlyweds Henry and Effie are honeymooning in Cape May, N.J., in 1957, tentatively navigating intimacy. Then they meet Clara and Max, hard-partying lovers who dazzle the innocent pair until they’ve lost more than their virginity. Cheek’s sensual first novel leaves you wanting more.”
– PEOPLE

"Henry and Effie’s honeymoon is meant to be their introduction to the pleasures of the body, but in the company of Clara and her promiscuous cohort they lose all track of boundaries. A dozy, luxurious sense of enchantment comes over the story, until the rude awakening at its finale.... Cape May does something better than critique or satirize: It seduces."
– The Wall Street Journal

A mesmerizing debut novel by Chip Cheek, Cape May explores the social and sexual mores of 1950s America through the eyes of a newly married couple from the genteel south corrupted by sophisticated New England urbanites.

Late September 1957. Henry and Effie, very young newlyweds from Georgia, arrive in Cape May, New Jersey, for their honeymoon only to find the town is deserted. Feeling shy of each other and isolated, they decide to cut the trip short. But before they leave, they meet a glamorous set of people who sweep them up into their drama. Clara, a beautiful socialite who feels her youth slipping away; Max, a wealthy playboy and Clara’s lover; and Alma, Max’s aloof and mysterious half-sister, to whom Henry is irresistibly drawn.

The empty beach town becomes their playground, and as they sneak into abandoned summer homes, go sailing, walk naked under the stars, make love, and drink a great deal of gin, Henry and Effie slip from innocence into betrayal, with irrevocable consequences.

Chip Cheek’s stories have appeared in The Southern Review, Harvard Review, Washington Square, and other journals and anthologies. He has been awarded scholarships to the Bread Loaf Writers’ Conference, the Tin House Summer Writers’ Workshop, and the Vermont Studio Center, as well as an Emerging Artist Award from the St. Botolph Club Foundation. Cape May is his debut novel. He lives in El Segundo, California, with his wife and baby daughter.

"Chip Cheek’s Cape May is a debut novel about a young, virginal Southern couple on their off-season honeymoon in 1957 to the titular seaside community in New Jersey, where they come under the spell of a sophisticated older couple. The book has superb prose, acute psychological insights, and a riveting narrative; though it’s impossible to put down once you’ve started, to call it a “summer read” is dismissive of Cheek’s carefully wrought artfulness."
–Teddy Wayne, Lit Hub

“Deceptively relaxed and simple at first, the novel seems to be an easygoing trip down Memory Lane. It soon reveals itself as a swirling vortex of psychological suspense with insights about marriage that recall writers like Margot Livesey and Alice Munro. The 1950s setting, the pellucid prose, and the propulsive plot make this very steamy debut novel about morality and desire feel like a classic.”
—Kirkus, STARRED REVIEW

“This remarkable debut novel offers a sobering reminder of how the possibilities of life, when first encountered, often carry their own riptide.”
—Booklist, STARRED REVIEW

“Cheek’s strong debut is a psychodrama that shows just how easily people can be manipulated. Cheek does a good job with his cast; Henry and Effie are finely drawn and their slide from innocence starkly depicted. The novel’s ending is particularly startling—a memorable final note in this cogent examination of marital infidelity and betrayal.”
—Publishers Weekly

“If you can’t get enough of women’s fiction novels with a twist, Cape May will be your perfect book club read.”
—Parade

“In Cape May, Cheek shows that every couple encounters such a moment of their own--whether physical, emotional or some combination of both--and it holds the power to change a relationship forever.”
—Shelf Awareness

"What a treat. Glamorous and nostalgic and very sexy, Cape May is a novel about marriage, lust, shabby seaside towns and lots of gin. Brilliantly unsettling—one of those books that stays with you."
—Paula Hawkins, #1 New York Times bestselling author of The Girl on the Train

"Earthy and sensual, raw and real, Cape May is an exquisitely crafted exploration of young love, the power of desire, and the lifelong ramifications of choices made in an instant. Cheek’s virtuosic prose reads like a modern classic, piercing through the veneer of male sexual fantasies of the 1950s and rendering a heartbreaking portrait of a man—and a marriage—undone by betrayal.”
—Whitney Scharer, author of The Age of Light

"Cape May is a perfectly mixed cocktail of beauty, desire, and heady desperation. In his gorgeous debut novel, Chip Cheek offers his readers a portrait of mid-century America and the timeless allure of love on the rocks."
—Bret Anthony Johnston, author of Corpus Christi and internationally bestselling Remember Me Like This

"Cheek’s glamorous and nostalgic first novel is an atmospheric tale of sexual longing and loss in 1950s America that nods to classics like The Great Gatsby and Revolutionary Road."
—The Independent

"Cheek’s smoldering debut novel focuses on naïve newlyweds from rural Georgia on their honeymoon in the chilly off-season of historic Cape May, New Jersey in the 1950s, at a moment of fading postwar innocence. When a trio of hedonistic socialites appear on the scene, the gin-infused dynamic of this ensemble drama subverts the couple’s romance and fidelity. In propulsive prose, Cheek provides an eerie, suspenseful thrill, and the callow narrator reflects the world on the brink of change."
—The National Book Review