The Mutant Project: Inside the Global Race to Genetically Modify Humans (Hardcover) 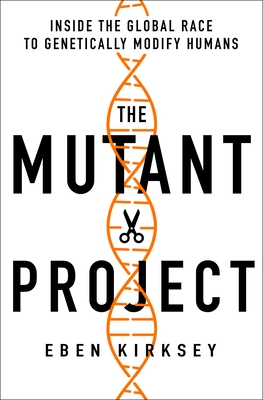 By Eben Kirksey
$28.99
Unavailable, Out of Stock, or Out of Print

An anthropologist visits the frontiers of genetics, medicine, and technology to ask: Whose values are guiding gene editing experiments? And what does this new era of scientific inquiry mean for the future of the human species?

"That rare kind of scholarship that is also a page-turner."
—Britt Wray, author of Rise of the Necrofauna

At a conference in Hong Kong in November 2018, Dr. He Jiankui announced that he had created the first genetically modified babies—twin girls named Lulu and Nana—sending shockwaves around the world. A year later, a Chinese court sentenced Dr. He to three years in prison for "illegal medical practice."

As scientists elsewhere start to catch up with China’s vast genetic research program, gene editing is fueling an innovation economy that threatens to widen racial and economic inequality. Fundamental questions about science, health, and social justice are at stake: Who gets access to gene editing technologies? As countries loosen regulations around the globe, from the U.S. to Indonesia, can we shape research agendas to promote an ethical and fair society?

Eben Kirksey takes us on a groundbreaking journey to meet the key scientists, lobbyists, and entrepreneurs who are bringing cutting-edge genetic engineering tools like CRISPR—created by Nobel Prize-winning biochemists Jennifer Doudna and Emmanuelle Charpentier—to your local clinic. He also ventures beyond the scientific echo chamber, talking to disabled scholars, doctors, hackers, chronically-ill patients, and activists who have alternative visions of a genetically modified future for humanity.

The Mutant Project empowers us to ask the right questions, uncover the truth, and navigate this brave new world.

EBEN KIRKSEY is an American anthropologist and Member of the Institute for Advanced Study in Princeton, New Jersey. He has been published in Wired, The Atlantic, The Guardian and The Sunday Times. He is sought out as an expert on science in society by the Associated Press, The Wall Street Journal, The New York Times, Democracy Now, Time and the BBC, among other media outlets. He speaks widely at the world’s leading academic institutions including Oxford, Yale, Columbia, UCLA, and the International Summit of Human Genome Editing, plus music festivals, art exhibits, and community events. Professor Kirksey holds a long-term position at Deakin University in Melbourne, Australia.

"The Mutant Project takes us on an eye-opening global adventure tracking the scientists racing to genetically engineer human beings and the activists who are pushing back. Eben Kirksey asks crucial questions at the heart of science and social justice—not only who will have access to new genetic technologies, but also who decides how and why they are developed? Power and profit, not human health and wellbeing, steer the answers. The Mutant Project exposes the urgency of democratically deliberating the ethics of gene editing before the science hurtles us into a future even more resistant to social change."
—Dorothy Roberts, author of Fatal Invention: How Science, Politics, and Big Business Re-create Race in the Twenty-first Century

"This book is a beautiful mutant, part mystery, part horror story, part genetic science and totally engaging. Kirksey takes us adventuring—whirling through an exciting and informative journey we encounter genes, CRISPR, technology, scientists, people, hopes, dreams and land smack dab in the mess of 'human nature.' If you only read one book about genomic technologies and human futures, this should be it."
—Agustin Fuentes, Professor of Anthropology, Princeton University

"Would you like to meet the first genetically modified people? From high-tech biology labs in Shenzhen to ACT UP activists in Berkeley, Eben Kirksey brings to life a ragtag crew of scientists and bio-hackers trying to mutate the human family, and maybe even cure cancer along the way. At turns terrifying and liberating, this infectiously readable book probes the limits of life itself, how we live it now and how it might be lived in the future."
—Alexander R. Galloway, author of The Interface Effect

"A riveting jaunt to the cliff-edge of the future, where scientists, engineers, patients and biohackers struggle over the power, function and meaning of human gene editing. Will gene editing save us or destroy us? Some of us or all of us? With rare access to key players, Kirksey is the perfect guide to this unsettling new ethical and political terrain. This engrossing book deftly integrates science, ethnography, and social fiction through the lens of the author’s peerless analytic imagination. Empathetic, provocative and probing, it is a must read."
—Alondra Nelson, Harold F. Linder Professor, Institute for Advanced Study and author of The Social Life of DNA

"Written with the gumption of an ethnographer, historian, and investigative journalist all in one, The Mutant Project is a fascinating record of close-up encounters at the vanguard of human genetic engineering. That rare kind of scholarship that is also a page-turner."
—Britt Wray, PhD, author of Rise of the Necrofauna: The Science, Ethics, and Risks of De-Extinction

"The Mutant Project is an engaging, lively and well-written account of recent advances in gene editing technologies in humans. Eben Kirksey provides a fascinating tour of the world behind the headlines, illuminating the science, politics, personalities, money and moral challenges involved."
—Robert Klitzman, MD, Director of Masters of Bioethics Program, Columbia University, and author of Designing Babies: How Technology is Changing the Ways We Create Children

"Kirksey is not afraid to venture into the unknown. Whether it is the microscopic realm of CRISPR or the fast-mutating milieu that is Shenzhen, China, he plunges into it with courage, care, and most importantly, a sense of wonder. The biological, financial, legal, and ethical entanglements that bind scientists, entrepreneurs, investors, governments, hackers, artists, journalists, patients, and parents together are as unsettling as they are generative. Taking us through this deeply moving journey filled with unexpected twists and turns, Kirksey shows us that it is possible to imagine, even create, a world more livable than the one we inhabit. Such an inspiring book!"
—Fan Yang, author of Faked in China

“The issues currently raised by CRISPR and the potential genetic engineering of humans may seem incredibly new, but in fact they are the oldest of all - what it means to be human, and what our relationship is with technology. From the domestication of fire to the smartphone, humans as a species cannot exist without our technologies. In this thought-provoking and well-researched book, Eben Kirksey wrestles anew with this oldest of questions - there are no easy answers, but the journey could change your life.”
—Mark Lynas, author of Seeds of Science: We Got it So Wrong on GMOs

"Kirksey provides a front row seat to the riveting series of events that led to the world’s first genetically-edited humans. It’s an absorbing tale of reckless ambition and breakneck technological advances that raises disturbing questions about the future of the human race."
—Steven Heine, author of DNA Is Not Destiny: The Remarkable, Completely Misunderstood Relationship between You and Your Genes

"The Mutant Project provides insightful and balanced coverage of the history, science, culture, business, and ethics of genetic engineering of humans since the birth of the first three-person IVF baby in 1997. Most importantly, Kirksey's landmark book uncovers new information about the health and treatment of the families and children affected directly by the fast-moving, ethically murky, and risky reproductive experiments with CRISPR-Cas9 in China. He boldly forecasts a near political future in which all societies will need to become more attentive to the rights and needs of genetically modified human beings."
—Eileen Hunt Botting, author of Artificial Life After Frankenstein

"Should the technology be reserved for addressing disease and correcting serious physical abnormalities? Or is human enhancement (bigger muscles, extra height) fair game too?... Kirksey tackles many of these complex issues, including ethics, social justice, inequality, threats of eugenics, and the influence of money on science...Science fiction is increasingly becoming science reality."
—Booklist

"Lucid study of recent efforts to alter the human gene to end hereditary diseases, a project fraught with ethical and medical implications... A readable, provocative look at biological tinkering that will doubtless shape the future, whether we like it or not."
—Kirkus Review

"The Mutant Project might provoke and disturb as it raises unsettling questions about the nature of human life, technology and corporate and personal greed, but Kirksey’s entertaining and fascinating combination of detective story, medical history and ethics is a must-read."
—Book Page

"A fascinating albeit chilling account of how human embryo engineering moved from the realm of sf to scientific fact. Recommended for anyone interested in the brave new world of genetic engineering technologies."
—Library Journal

"Kirksey’s exploration of the debates over genetic modification eventually takes him around the world....Dr. Kirksey paints a detailed and nuanced portrait of Dr. He without condoning his actions...In examining Crispr, it becomes clear, we are called upon to examine ourselves too."
—The Wall Street Journal

"Out of this rich tapestry of stories, some central themes emerge, including the question of how profit-driven medicine and dreams of personal and national glory shape the complex landscape of modern genetic medicine. Kirksey shows how these are global phenomena that unfold their power in the West and the East, in mainstream academia, and at the fringes of DIY biology. He is also concerned about how cultural ideas about race, beauty, and health become intertwined with new genetic technologies and with the global financial network."
—Science