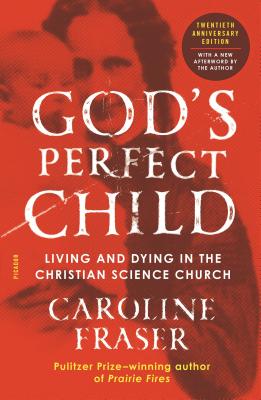 From Pulitzer Prize-winning author and former Christian Scientist Caroline Fraser comes the first unvarnished account of one of America's most controversial and little-understood religious movements.

Millions of Americans – from Lady Astor to Ginger Rogers to Watergate conspirator H. R. Haldeman – have been touched by the Church of Christ, Scientist. Founded by Mary Baker Eddy in 1879, Christian Science was based on a belief that intense contemplation of the perfection of God can heal all ills – an extreme expression of the American faith in self-reliance. In this unflinching investigation, Caroline Fraser, herself raised in a Scientist household, shows how the Church transformed itself from a small, eccentric sect into a politically powerful and socially respectable religion, and explores the human cost of Christian Science's remarkable rise.

Fraser examines the strange life and psychology of Mary Baker Eddy, who lived in dread of a kind of witchcraft she called Malicious Animal Magnetism. She takes us into the closed world of Eddy's followers, who refuse to acknowledge the existence of illness and death and reject modern medicine, even at the cost of their children's lives. She reveals just how Christian Science managed to gain extraordinary legal and Congressional sanction for its dubious practices and tracks its enormous influence on new-age beliefs and other modern healing cults.

A passionate exposé of zealotry, God's Perfect Child tells one of the most dramatic and little-known stories in American religious history.

Caroline Fraser is the editor of the Library of America edition of Laura Ingalls Wilder’s Little House books, and the author of Rewilding the World and God’s Perfect Child. Her writing has appeared in The New York Review of Books, The New Yorker, The Atlantic, the Los Angeles Times, and the London Review of Books, among other publications. She lives in New Mexico.

“Eye-opening . . . the most powerful and persuasive attack on Christian Science to have been written in this century.”
—Martin Gardner, Los Angeles Times Book Review

“New ... Startling ... Fraser has an eye and ear for the kind of detail that can help readers make up their own minds about an always-controversial American religious expression.”
—Martin Marty, The Boston Globe