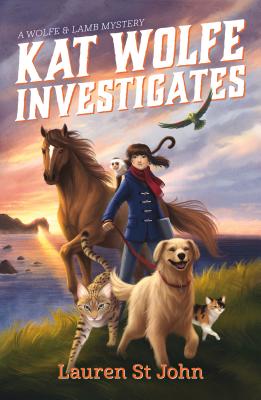 This is book number 1 in the Wolfe and Lamb Mysteries series.

When twelve-year-old Kat Wolfe starts a pet-sitting agency, she soon finds herself unraveling a mystery, in Kat Wolfe Investigates, the first book in the middle-grade Wolfe and Lamb Mysteries from award-winning author Lauren St. John.

After a break-in at their London home, Kat Wolfe and her veterinarian mum decide it’s time to move to the country. Dr. Wolfe’s new job on England’s Jurassic Coast comes with a condition: They have to adopt Tiny, a huge Savannah who resists Kat’s best attempts at cat whispering.

Kat starts a pet-sitting agency to make pocket money, but then the owner of her first client, an Amazon parrot, vanishes from his gadget-filled mansion. Only one person shares Kat’s conviction that he’s the victim of foul play: Harper Lamb, an American girl laid up with two broken legs thanks to her racehorse.

Kat and Harper team up, but what starts out as mystery-solving fun turns deadly for the duo. When all clues point to a nearby army base, can they count on their unruly animal friends to save the day—and their lives?

Lauren St. John was born in Rhodesia, now Zimbabwe. After studying journalism in Harare, she relocated to England. She is the author of numerous books including the multi award-winning White Giraffe children’s series, the bestselling One Dollar Horse series, and the Laura Marlin Mysteries.

"St. John's book is suspenseful in its shifting possibilities, constructed with care, scattered with information, techno-savvy and engaging in its characterisation. . ." —Times UK

"In Kat, readers will find a British Nancy Drew, with plenty of animal sidekicks. A fun global look at seaside inhabitants, animal science, and the power of persistence." —Booklist

"Warm, intriguing characterization, with just the right tingle of peril." —The Guardian

"Suspenseful in its shifting possibilities, constructed with care, scattered with information, techno-savvy, and engaging in its characterization." —Sunday Times

"St. John is a wonderful writer, who lets the adventure hurtle on without ever making the reader feel hurried." —Saturday Telegraph

“Full of adventure and mystery. . . . One of those books that you really don't want to put down.” —The Guardian

Kidnap in the Caribbean:

“Another cracking adventure. . . . The Caribbean locations sparkle.” —The Telegraph

“A fast-paced mystery with an underlying conservation theme. Tween readers will be absorbed by the adventure, the animals, and the African setting.” —School Library Journal