Butterfly: From Refugee to Olympian - My Story of Rescue, Hope, and Triumph (Hardcover) 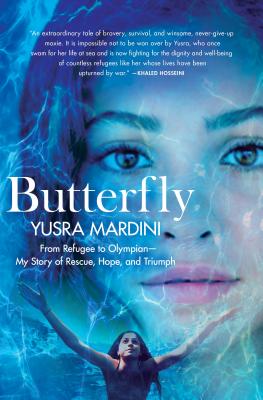 By Yusra Mardini
$26.99
Unavailable, Out of Stock, or Out of Print

Butterfly is the inspiring story of how one woman saved fellow refugees from drowning—and how she went on to become an Olympic swimmer.

When young Syrian refugee Yusra Mardini realized her boat's engine shut down as she was traveling from Syria to Greece with other refugees, there was no hesitation: she dove into the water. Surfacing, she heard desperate prayers and sobbing from the passengers in the sinking boat above her. Between the waves, her elder sister Sarah screamed at her to get back on the boat. But Mardini was determined. She was not going to let Sarah do this alone. Grabbing the rope with one hand, she began kicking up the black water, inching the boat towards the distant shore.

This bold act of bravery saved the lives of a boatload of refugees heading to Turkey from Syria. After her arrival in Greece, Mardini, focused and undeterred, worked toward a lifelong goal: to compete in the Olympics. She succeeded, and competed in 2016 on the Refugee Olympic Team in Rio de Janeiro.

Butterfly tells her story, from Syria to the Olympics to her current work with the UN as a Goodwill Ambassador. Mardini is eager to tell her story in the hopes that readers will remember that refugees are ordinary people in extraordinary circumstances, chased from their homes by a devastating war. In today's political climate, this story is guaranteed to inspire and educate readers from every background.

Yusra Mardini is an Olympic swimmer and a UNHCR Goodwill Ambassador. She competed in the 2016 Olympics in Rio de Janeiro as a member of the Refugee Olympic Athletes Team. Mardini is from Damascus, Syria.

"War, for all its atrocities, is punctuated by instances of unfathomable human spirit and grace. Olympic swimmer Yusra Mardini’s story is a prime example. Butterfly recounts this Syrian refugee’s extraordinary tale of bravery, survival, and winsome, never-give-up moxie. It is impossible not to be won over by Yusra, who once swam for her life at sea and is now fighting for the dignity and wellbeing of countless refugees like her whose lives have been upturned by war."—Khaled Hosseini, #1 New York Times bestselling author of The Kite Runner and A Thousand Splendid Suns

"[Mardini] offers an exceedingly rare window into middle-class girlhood in the middle of one of the most destructive wars of our time, and an even rarer start-to-finish account of the arduous migrant journey into Europe." —The New York Times

"Butterfly is a powerful story of survival, inspiration, and hope with a resounding message: no one chooses to be a refugee; rather, horrific circumstances force ordinary people to take extraordinary measures to save themselves. This unforgettable memoir shines a spotlight on the refugee experience and the role sports can play in giving a voice to those affected by conflict throughout the world."—Booklist (starred review)

"The extraordinary tale of a Syrian woman's journey from her war-torn country all the way to the 2016 Summer Olympics in Brazil... moving, action-packed...a rousing, exciting true story of remarkable resilience." - Kirkus Reviews

"Yusra, we could not be prouder of you...for your courage, for your resilience and the great example that you're setting for children everywhere." —Barack Obama, UN 2016 Leaders' Summit on Refugees