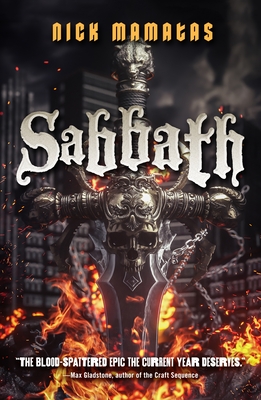 By Nick Mamatas
$17.99
Unavailable, Out of Stock, or Out of Print

Highlander meets Seven in Nick Mamatas's Sabbath, the story of a legendary warrior who dies in battle, wakes up in the present day, and is tasked with hunting down the Seven Deadly Sins.

The infamous eleventh-century warrior Hexen Sabbath is plucked from death and certain damnation by a being claiming to be an angel of the Lord, and finds himself dropped into contemporary Manhattan with no clothes, no weapons, no resources, and one mission—to track down and kill the living personifications of the Seven Deadly Sins before they bring about Armageddon.

With time running out and his only ally a destitute art gallery owner, Sabbath must fight his way through New York's elite and challenge the world's most powerful man, or an eternity of suffering will be his, and our, only reward.

NICK MAMATAS is the author of several novels, including the instant cult classic Move Under Ground and the Lovecraftian crime novel I Am Providence. His short fiction has appeared in Best American Mystery Stories, Year's Best Science Fiction & Fantasy, Tor.com and dozens of other anthologies and magazines. Much of his writing was collected in The People's Republic of Everything.

“Nick Mamatas continues his reign as the sharpest, funniest, most insightful and political purveyor of post-pulp pleasures going. He is the People’s Commissar of Awesome.”
—China Miéville, bestselling author of The City & the City

“Mamatas is a powerfully acerbic writer, both in fiction and online. His acid wit is infamous.” —Cory Doctorow, bestselling author of Walkaway

"Gonzo grindhouse fantasy—Tales from the Crypt meets Hercules in New York with occasional visits from St Augustine. The blood-spattered epic the current year deserves." —Max Gladstone, author of the Craft Sequence on Sabbath

“Dark and hilarious. . .I am Providence is that murder-mystery-in-a-writers-convention you didn't even know you wanted, but (like the human skin-bound book which propels the plot) you really must buy.” —Lavie Tidhar, author of Osama and The Violent Century

“If you’re looking for a wacky summer beach read with a dose of horror and you love Lovecraft, I Am Providence will satisfy your abyss of cravings—with some hilarious and pointed jabs at Lovecraftian fandom.” —Fangoria

“Mamatas knows his subject inside and out, and that makes I Am Providence all the more cutting. He's a fan himself, as well as a skeptic, and he turns his considerable authority and satirical skill toward skewering the subculture that's grown up around Lovecraft over the past century. . . . I Am Providence is pointed social commentary wrapped in a bilious in-joke—but one that's more than worth getting in on.” —Jason Heller, NPR