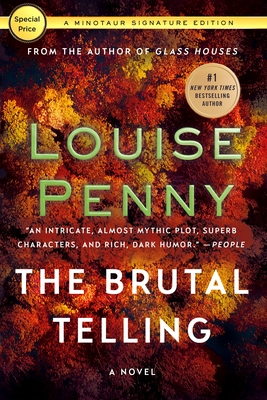 This is book number 5 in the Chief Inspector Gamache Novel series.

“Louise Penny just keeps getting better and better. In her latest installment in the Chief Inspector Gamache series, she creates a satisfying read that is impossible to put down. Once again in the remote Canadian village of Three Pines, Gamache's team is summoned when an unknown dead man is found in the town's favorite bistro. Gamache searches near and far to unravel the mystery, yet the most intriguing journey is the one into the killer's mind.”
— Sally Morrison, Sierra Madre Books, Sierra Madre, CA

With those words the peace of Three Pines is shattered. Everybody goes to Olivier's Bistro—including a stranger whose murdered body is found on the floor. When Chief Inspector Gamache is called to investigate, he is dismayed to discover that Olivier's story is full of holes. Why are his fingerprints all over the cabin that's uncovered deep in the wilderness, with priceless antiques and the dead man's blood? And what other secrets and layers of lies are buried in the seemingly idyllic village?

Gamache follows a trail of clues and treasures—from first editions of Charlotte's Web and Jane Eyre to a spiderweb with a word mysteriously woven in it—into the woods and across the continent, before returning to Three Pines to confront the truth and the final, brutal telling.

*BONUS CONTENT: This edition of Brutal Telling includes a new introduction from the author and a discussion guide.

“Penny has been compared to Agatha Christie, [but] it sells her short.”
—Booklist (starred review)

“Magic . . . [with] an elegance and depth not often seen.”
—The New York Times Book Review

“If you don't give your heart to Gamache, you may have no heart to give.”
—Kirkus Reviews (starred review)

“A treat for the mind and a lesson for the soul, this is a novel full of surprises.”
—Richmond Times-Dispatch

“It's Penny's most ambitious novel to date, adding much to our knowledge of the continuing characters and creating a framework of myth that lends structure to the tale…
eloquent prose and amazingly complex characters.”
—Denver Post

“In this fifth installment of Louise Penny's wonderful series, she keeps things fresh by making a beloved member of her core cast, Olivier Brule, a suspect in the death of a recluse found dead on the floor of Olivier's own bistro… Penny blends poetry, ciphers and history in all its ‘brutal telling’ with the usual mouthwatering bistro meals and the quirky villagers to continue one of the best series out there today.”
—Charlotte Observer

“If you've yet to meet the fascinating Chief Inspector Armand Gamache, who has starred in four previous novels, this book is a good place to start. The plot, like the man, is intelligent and never boring. Penny has crafted another complex mystery with twists at every turn of the page.”
—RT Book Magazine

“As in her previous four Inspector Gamache mysteries, Penny grafts a suspenseful whodunit onto her sketch of the whims and mores of Three Pines’ small population.”
—Quill and Quire

“…little treasures are scattered throughout THE BRUTAL TELLING and all the other books as well. I dare anyone to say that this isn’t literary fiction.
But even more, this is poetry.”
—Mystery News

“Though Gamache is undeniably the focus, Penny continues to develop her growing cast of supporting characters, including newcomers Marc and Dominique Gilbert, who are converting an old house-the site of two murders-into a spa. Readers keen for another glimpse into the life of Three Pines will be well rewarded.”
—Publishers Weekly (starred review)

“Having won numerous mystery prizes, including the prestigious Arthur Ellis and Anthony awards for her debut, Still Life, Canadian author Penny has only gotten better with each succeeding novel. Her fifth in the series is the finest of all. Featuring series protagonist Chief Inspector Gamache, this literary mystery explores the ways in which sins of the past have a way of resurrecting themselves, wreaking havoc upon their perpetrators, and, unfortunately, the innocent. Thus, when a hermit is slain in the woods near an isolated village in rural Quebec, secrets surface, unmasking characters who have adopted benign personae to conceal their questionable past deeds. Fortunately, sagacious Gamache possesses the acumen to peel away the layers of deceit and to expose the truth. This superb novel will appeal to readers who enjoy sophisticated literary mysteries in the tradition of Donna Leon.”
—Library Journal (starred review)