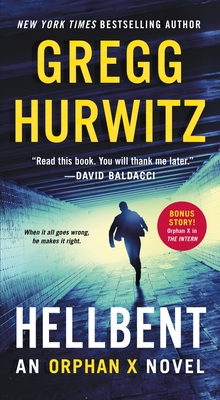 This is book number 3 in the Orphan X series.

when there’s nowhere else to turn. . .


His name is Evan Smoak. Taken from a group home at age twelve, he was raised and trained as an off-the-books government assassin: Orphan X. After breaking with the Orphan Program, Evan disappeared and reinvented himself as the Nowhere Man, a man spoken about only in whispers and dedicated to helping the truly desperate. Now, the person in need of help is Jack Johns, the man who raised and trained him, and the only father Evan has ever known. Secret government forces are busy trying to scrub the remaining assets and traces of the Orphan Program and they have finally tracked down Jack. With little time remaining, and an elusive new enemy on his trail, Jack gives Evan his last assignment: to find and protect his last protégé and recruit for the program—or die trying. . .

"Hellbent is carved from the same cloth of not only Lee Child, but also David Baldacci, and it proves Hurwitz to be every bit the equal of both of them. This is raw, visceral action writing layered with rare depth and emotion, making Hellbent an early contender for one of the best thrillers of the year." —Providence Journal

"A beautifully crafted story that builds on the previous two books in surprising and unsettling ways." —Winnipeg Free Press

"Hellbent is Gregg Hurwitz firing on all cylinders." —The Guardian (UK)

"Where there's Smoak, there's firepower. The only thing better than a great book is a series in which each book is exponentially better than the last. It's not a feat that can be pulled off by just any author, but it's viscerally powerful when done right and Hellbent is as right as it gets." —The Oklahoman

"This is a great novel... do not miss this one." —Booklist (starred review)

"As well-done as the rest of the series and bloody good fun." —Kirkus Reviews

"This one is personal... fans of the first two books will enjoy this nail-biting, twisty thriller." —Library Journal