The Man in the Microwave Oven: A Mystery (Theo Bogart Mysteries #2) (Hardcover) 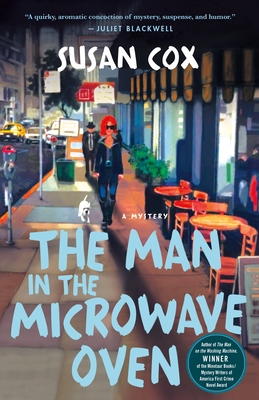 By Susan Cox
$27.99
In Stock Now - Click Title to See Store Inventory. Please allow up to 48-hours for Curbside Pickup orders to be processed.

This is book number 2 in the Theo Bogart Mysteries series.

Fleeing from a murder and family tragedy in her native England, where she was the scandal du jour for the tabloid press, Theo Bogart changed her name and built an undercover life in a close-knit San Francisco neighborhood. She didnt expect to find love and friendship there, and now she doesnt know howor ifto reveal the truth.

After a confrontation with a difficult neighbor, Theo fears her secrets are about to be uncovered after all. When the woman who threatened to expose her is murdered, Theo is embroiled in the kind of jeopardy she crossed an ocean to escape. Worse yet, dangerous family secrets have followed her. Theos grandfather unveils a glimpse of the shadowy world he once inhabited as an agent for the British Secret Service, bringing an even bigger breed of troubleand another deathto Theos doorstep. She finds herself fighting to protect herself, her family, and her new friends, aware that one of them might be a murderer.

Susan Cox has once again painted a delightfully quirky portrait of a colorful San Francisco neighborhood and a woman finding her way through exactly the kind of scandalous mystery she was trying to leave behind.

SUSAN COX is a former journalist. She has also been marketing and public relations director for a safari park, a fundraiser for non-profit organizations, and the president of the Palm Beach County (Fla.) Attractions Association. She considers herself transcontinental and transatlantic, equally at home in San Francisco and Florida and with a large and boisterous extended family in England. She frequently wears a Starfleet communicator pin, just in case. Her first novel, The Man on the Washing Machine, won the 2014 Minotaur Books/Mystery Writers of America First Crime Novel Competition.

Praise for The Man in the Microwave Oven

The follow-up to Coxs award-winning The Man on the Washing Machine includes a delightful amateur sleuth and eccentric characters with appeal for fans of traditional mysteries. The intricate plotting will keep readers guessing. Library Journal (starred review)

Theo is a well-written character and the story is solid and sometimes fun. If you like somewhat offbeat characters this is the novel for you. Red Carpet Crash

I was surprised at almost every turn, and delightfully so, by the array of characters and situations presented by this obviously talented new writer. Aunt Agathas

Praise for The Man on the Washing Machine

[A] madcap romp. First-novelist Cox controls the seeming chaos of her plot with finesse, keeping readers in the dark until the very end as to who is involved in what. An impressive debut. Booklist

Debut novelist Susan Cox writes with deft assurance. She has created an appealing cast of characters and an absorbing plot that kept me turning the pages." Margaret Maron

An impressive debut...Cox ladles on the humor while also delivering a multi-layered tale about a close-knit San Francisco neighborhood and a young woman trying to reinvent herself. Cox's light approach to The Man on the Washing Machine is balanced by perceptive back stories for each character...The brisk plot's twists and turns lend plenty of surprises while maintaining believability. South Florida Sun Sentinel

BeguilingThe book's heart lies with the eclectic mix of characters and their tight-knit San Francisco neighborhood, which provide an engaging blend of cultures and tensions. The plot will keep more than just the characters guessing until the very end. RT Book Reviews (4 stars)