Wrath of the Furies: A Novel of the Ancient World (Novels of Ancient Rome #15) (Paperback) 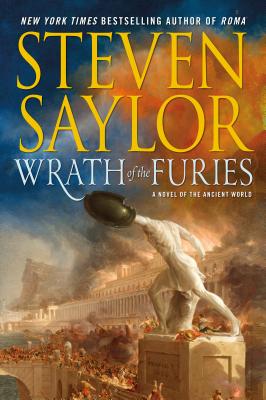 By Steven Saylor
$17.99
In Stock Now - Click Title to See Store Inventory. Please allow up to 48-hours for Curbside Pickup orders to be processed.

This is book number 15 in the Novels of Ancient Rome series.

In 88 B.C., it seems as if the entire ancient world is at war. In the west, the Italian states are rebelling against Rome; in the east, Mithridates is marching through and conquering the Roman Asian provinces. Even in the relatively calm Alexandria, a coup has brought a new Pharaoh to power and chaos to the streets. The young Gordianus has been waiting out the chaos in Alexandria, with Bethesda, when he gets a cryptic message from his former tutor and friend, Antipater. Now in Ephesus, as part of Mithridates' entourage, Antipater seems to think that his life is in imminent danger.

To rescue him, Gordianus concocts a daring, even foolhardy, scheme to go "behind enemy lines" and bring Antipater to safety. But there are powerful, and deadly forces, at work here, which have their own plans for Gordianus. Not entirely sure whether he's a player or a pawn, Gordianus must unravel the mystery behind the message if he's to save himself and the people he holds most dear.

"Every bit as good as its history- and tension-packed predecessors…sustains a high level of suspense, while Saylor gives readers great sandals-on-the-ground details of the ancient world." - Booklist (starred review)

"Saylor has concocted one of his best novels so far with this tale of intrigue and extraordinarily bloody reckonings...an international thriller, with espionage, world-shaking events, and plenty of plots, plans, and conspiracies." - Edge Boston

"The series has been rejuvenated by the younger hero and is now better than ever. ... [Saylor] the undisputed master of the Roman historical mystery." - Historical Novel Society

"With its expert mix of comedy and tragedy, Wrath may be Saylor's most thought-provoking work, a book that shows sympathy for all while asking us to ponder mankind's seemingly limitless capacity to do terrible things, then as now." - USA Today