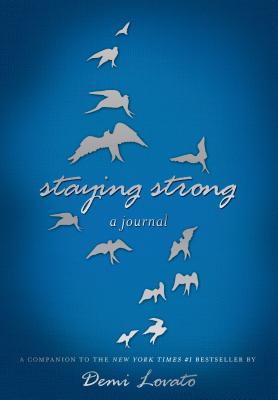 Going hand-in-hand with Demi Lovato's #1 New York Times-bestselling book of affirmations, Staying Strong: 365 Days a Year, comes a companion journal. In a beautifully designed and free-flowing paperback format of lined pages and blank pages, this journal has everything for readers and writers to capture and reflect on what they feel at any given moment.

Staying Strong: A Journal also features new quotes chosen by Demi throughout to help inspire and motivate expression—happiness, sadness and everything in between. Demi reminds readers that it's important to express yourself in order to stay strong every day.

Twenty-one-year-old Demi Lovato’s fame began when she was cast on Barney and Friends. From the outside, she was all smiles, but as she grew up in front of the camera—the star of the record-breaking Camp Rock franchise; leading lady of her own Disney show, Sonny with a Chance; and a budding music career—she was falling apart. As Demi entered adolescence, she was being bullied, and she struggled with bulimia, suicidal thoughts, substance abuse, and eventually secretly began cutting herself.

Her career was taking off, but she bowed out of her world-wide tour and checked herself into rehab, which she successfully completed. She started the Lovato Treatment Scholarship program to help others with their illnesses.

She’s currently entering her second season as an X-Factor judge and her latest album Demi has gone platinum. She will also be joining the fifth season of Glee. Demi has many accolades, including one MTV Video Music Award, twenty-five Teen Choice Awards nominations, 14 of which she has won, four People’s Choice Awards, one ALMA award, a Billboard Touring Award and several others.

Outside of her work in the entertainment industry, Lovato is involved in philanthropic activity through charity work and various social and environmental causes. In May 2013 she was awarded for her dedication as a mentor to teens and young adults with mental health challenges at a National Children’s Mental Health Awareness day hosted by SAMHSA in Washington.