Gideon's Spies: The Secret History of the Mossad (Paperback) 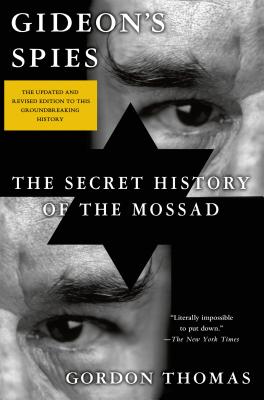 In the secret world of spies and covert operations, no other intelligence service continues to be as surrounded by myth and mystery as the Mossad. Gordon Thomas reveals that all too often the truth exceeds all the fantasies about the Mossad. Revised and updated for 2015, this new edition includes:

- Mossad's secret meeting in 2013 with Saudi Arabia's intelligence chief to plan for Israel to use Saudi to attack Iran should the Geneva discussion fail to be honored by Iran.
- The attack on Iraq's nuclear reactor that will be the flight path to an attack on Iran's nuclear facilities.
- Mossad's new cyber-war unit preparing to launch its own pre-emptive strike.
- Why Mossad's former director, Meir Dagan, has spoken out against an attack on Iran.
- Mossad agents who operate in the "Dark Side" of the internet to track terrorists.
- Mossad's drone and its first killing.
- Mossad's role in the defense of Israel's Embassy in Cairo during the Arab Spring.
- An introduction to Mossad's new director, Tamir Pardo.

These and other stunning details combine to give Gideon's Spies the sense of urgency and relevance that is characteristic of truly engrossing nonfiction.

GORDON THOMAS is a bestselling author of forty books published worldwide, including The Pope's Jews, Secret Wars, and Operation Exodus. He has firmly established himself as a leading expert on the often sinister, but always compelling world of secret intelligence.

“Literally impossible to put down.” —The New York Times

“A fascinating look at a spy organization that has remained off-limits to most journalists. A first-rate nonfiction account.” —GQ

“A compelling read, with any number of disturbing revelations.” —FHM

“Grabs attention with a riveting yarn... will have readers intrigued.” —Publishers Weekly