The Stephen King Companion: Four Decades of Fear from the Master of Horror (Paperback) 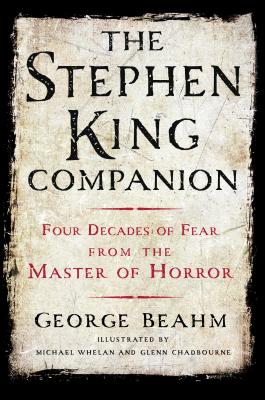 The Stephen King Companion is an authoritative look at King's personal life and professional career, from Carrie to The Bazaar of Bad Dreams.

Supplemented with interviews with friends, colleagues, and mentors who knew King well, this book looks at his formative years in Durham, where he began writing fiction as a young teen, his college years in the turbulent sixties, his struggles with early poverty, working full-time as an English teacher while writing part-time, the long road to the publication of his first novel, Carrie, and the dozens of bestselling books and major screen adaptations that followed.

For fans old and new, The Stephen King Companion is a comprehensive look at America's best-loved bogeyman.

Michael Whelan is an illustrator who specializes in fantasy and science fiction book cover art. Some of his best-known covers appear on Stephen King novels and the Del Rey editions of Anne McCaffrey's Dragonriders of Pern series and Edgar Rice Burroughs' Mars series. He also created interior illustrations for Stephen King's The Dark Tower and The Gunslinger, the final volume of Robert Jordan's Wheel of Time series, and Brandon Sanderson's The Stormlight Archive.

Whelan's work has garnered dozens of awards, including fifteen Hugo Awards, Twelve Chelsey Awards, three World Fantasy Awards, and an unofficial "SuperHugo" for Best Artist of the Last 50 Years. He is also the first living artist to have been inducted into the Science Fiction Hall of Fame.

Glenn Chadbourne is an artist best known for his horror and fantasy work. He has created covers and illustrations for books and magazines such as Cemetery Dance Publications, Subterranean Press, and Earthling Publications. Chadbourne is best known for illustrating The Secretary of Dreams, a graphic collection of Stephen King stories. He has also written, illustrated, and self-published his own comics, such as ChillVille and Farmer Fiend's Horror Harvest.

“This is for the Cujo-level rabid fan.” —Booklist

“[Beahm] has done a wonderful job with the book, its text, its illustrations, its photos...well, all of the books contents are well worth reading. This is a book every King fan will want to read no matter if you are like me and need to know everything there is about him or if you just read his books and don't care about much more. You will still enjoy this book and it will give you a better insight into King and his writing.” —Lilja's Library on The Stephen King Companion

"There’s so much to this sumptuous new book on King, and though it’s over double the size of the previous Stephen King Companion, it’s just as fun to read. King fans looking for a deeper glimpse into the books and the man who wrote them couldn’t do better than Four Decades of Fear from the Master of Horror, now the definitive first stop on the journey into Stephen King criticism." —Cemetery Dance

"The completeness of Beahm's analysis coupled accessible writing style make this book extremely absorbing. Owing to its tone and format, this title will appeal most to fans of King, who will find that its insights lend a new light to their favorite tales."
—Library Journal (starred review)

"Beahm's revelations are true to my heart as someone who has appreciated the scope of Stephen King more every year... [A] totally viable literary reference book that is up-to-date and inclusive." —Daily Press (Virginia)

"Beahm does a remarkable job of presenting all aspects of King's life, including his family and their values . . . A sure winner with King fans or those curious about the man behind the legend."—School Library Journal

"Just what the fans of the nation's most popular writer needed: a sprightly collection of artifacts, interviews, speeches, trivia, opinions, and pictures about their man and his books."—Booklist

"To his credit, the Companion doesn't assume that everything King touches is perfect. This gives the whole effort credibility, which books of this type often don't have."—The Washington Post

"The Stephen King Companion is the best guide to the entire trajectory of King's work . . . All in all, this is a treasure chest of information, plus photographs."—Sunday Record (Middletown, N.Y.)