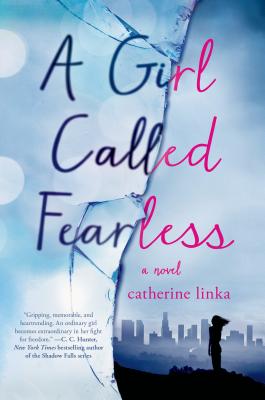 This is book number 1 in the The Girl Called Fearless Series series.

What if there were a hormone in beef that decimated the majority of women in the United States? Catherine Linka presents a horrifically realistic future where women are a commodity and their individual rights are nonexistent. Under this Paternalist Movement, all Avie wants to do is go to college. However, Avie’s dream ends when her father sells her for $50 million to a businessman twice her age.  Now she faces a terrible choice, torn between saving her father’s company--by going through with the marriage--or leaving everything she’s ever known and fleeing to Canada.  Page turning and suspenseful, Linka really knows how to up the stakes with star-crossed love, secrets and potential revolution. What really shines though is watching Avie’s evolution from sheltered teenager to a bold heroine. Great for book clubs, there’s plenty to discuss.

An Indie Next Pick!

Avie Reveare has the normal life of a privileged teen growing up in L.A., at least as normal as any girl's life is these days. After a synthetic hormone in beef killed fifty million American women ten years ago, only young girls, old women, men, and boys are left to pick up the pieces. The death threat is past, but fathers still fear for their daughters' safety, and the Paternalist Movement, begun to "protect" young women, is taking over the choices they make.
Like all her friends, Avie still mourns the loss of her mother, but she's also dreaming about college and love and what she'll make of her life. When her dad "contracts" her to marry a rich, older man to raise money to save his struggling company, her life suddenly narrows to two choices: Be trapped in a marriage with a controlling politician, or run. Her lifelong friend, student revolutionary Yates, urges her to run to freedom across the border to Canada. As their friendship turns to passion, the decision to leave becomes harder and harder. Running away is incredibly dangerous, and it's possible Avie will never see Yates again. But staying could mean death.
From Catherine Linka comes this romantic, thought-provoking, and frighteningly real story, A Girl Called Fearless, about fighting for the most important things in life—freedom and love.

CATHERINE LINKA was almost thrown out of boarding school for being "too verbal." Fortunately, she learned to channel her outspokenness and creative energy into writing. A passionate traveler who has visited Iceland, the Amazon, and the Arctic circle, Catherine has seen five types of whales in the wild, but no orcas. Yet. She doesn’t believe in fate, but she did fall in love with her husband on their first date when he laced up her boots, because she had a broken hand. She is the author of A Girl Called Fearless.

“A deftly plotted portrait of the evolution of a teenage girl into a dystopian heroine.” —Kirkus Reviews

“The concept of a nation mourning multiple generations of women (other countries had long since banned American meat) is gripping, and the action flows at a steady and satisfying pace, propelling readers through to the cliffhanger ending...There is something achingly vulnerable in this novel where almost everyone seems to search in vain that will likely linger with readers.” —Center of Children's Books Review

“Breathlessly written and terrifying in its implications, Linka's debut is not only a thriller but a warning.” —Gennifer Albin, author of Crewel

“With a frightening reality, a forbidden romance, and a main character to root for, Fearless is a riveting read.” —Megan Miranda, author of Fracture

“With civil liberties on the ropes and paternalism gone rampant, it's time for a brave young heroine to ring out the news. Can it be merely coincidence that her name is Reveare?” —Tim Wynne-Jones, author of Blink & Caution

“The short chapters keep the action moving in this solid selection, best for readers who enjoy plot-driven stories.” —Kirkus Reviews

“I find myself wanting to demand the sequel right now, this very second, to find out just what Avie has planned and what was in Sparrow's message. All in all, very dystopian, very hard (emotionally) to read and very interesting.” —USA TODAY