All These Things I've Done: A Novel (Birthright #1) (Paperback) 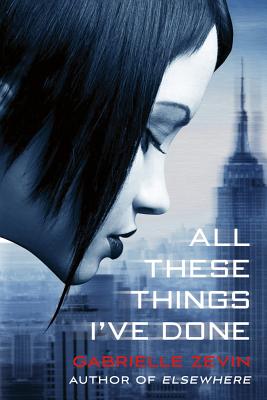 This is book number 1 in the Birthright series.

In 2083, chocolate and coffee are illegal, paper is hard to find, water is carefully rationed, and New York City is rife with crime and poverty. And yet, for Anya Balanchine, the sixteen-year-old daughter of the city's most notorious (and dead) crime boss, life is fairly routine. It consists of going to school, taking care of her siblings and her dying grandmother, trying to avoid falling in love with the new assistant D.A.'s son, and avoiding her loser ex-boyfriend. That is until her ex is accidently poisoned by the chocolate her family manufactures and the police think she's to blame. Suddenly, Anya finds herself thrust unwillingly into the spotlight--at school, in the news, and most importantly, within her mafia family.

From Gabrielle Zevin--the author of the critically acclaimed Elsewhere--comes All These Things I've Done, a masterful novel about an impossible romance, a mafiya family, and the ties that forever bind us.

Gabrielle Zevin is the author of many popular books for teens, including Elsewhere, Memoirs of a Teenage Amnesiac, and In the Age of Love and Chocolate, the final novel in the Birthright trilogy. Her novels for adults are Margarettown, The Hole We’re In, and the forthcoming The Storied Life of A.J. Fikry. She was also the screenwriter for Conversations with Other Women, for which she received an Independent Spirit Award nomination. Zevin is a graduate of Harvard University. After many years on Manhattan’s Upper West Side, she recently moved to Silver Lake, Los Angeles.

Ilyana Kadushin is best known for her narration of the Twilight audiobook series, and has worked on other audiobooks, including The Memory Keeper’s Daughter, Post Grad and Dune, which won an Audie Award. Her other voice work includes national commercials, animation, and popular video games such as Lord of the Rings.

Kadushin has performed as both an actor and a singer for companies including Nickelodeon, BBC America, Sesame Street Television, MTV, and Cartoon network. She sang on the soundtrack of HBO Best Documentary Film Award & Finalist Separate But Equal.

“Narrator Ilyana Kadushin perfectly captures Anya's character, providing the heroine with a voice that sounds young and vulnerable, but strong-willed…The excitement and drama of the book's early chapters translate well to audio and will keep listeners on the edge of their seats.” —Publishers Weekly

“Narrator Ilyana Kadushin does an outstanding job voicing the various characters, adding credibility to the production. Although the story's dystopian elements seem lightweight – humorous even – compared to the apocalyptic themes of other titles in the genre, the intriguing mystery and exceptional characterization will keep listeners thoroughly invested.” —School Library Journal

“Narrator Ilyana Kadushin quickly brings listeners into Anya's life as she navigates the chaos all around her. Kadushin paces her performance to methodically reveal Anya's intelligence and protectiveness of her family. Carefully measured emotion perfectly matches the carefully distanced feelings that Anya needs to keep in check in order to survive all the things thrown at her that she must do…Listeners will eagerly look forward to the next installment.” —Sound Commentary

“The story is incredibly compelling–an intriguing future with a classic tale of star-crossed lovers. Readers will be racing to find out the sequel's release date as soon as they finish the last page.” —School Library Journal

“…romance fans will likely adore the star-crossed passionate romance, the heroic gestures, and the responsibility-be-damned happy ending that brings the protagonists back together.” —BCCB

“The talented Zevin writes Anya and Win's high-wire romance as jolting for both the participants and readers.” —Booklist, starred review

“…the achingly realistic romance between this latter-day Romeo and Juliet, told in Anya's earnest voice, will attract readers as surely as chocolate attracts…mobsters.” —Horn Book Magazine

“In Gabrielle Zevin's All These Things I've Done, we fast-forward to 2083. Chocolate and coffee are contraband (can you imagine?!), paper and water are scarce, and New York is crawling with crime and poverty. But this is normal for sixteen-year-old Anya Balachine, daughter of the city's late crime boss. Until, that is, the chocolate her family manufactures accidentally poisons her ex and all fingers are pointed at her.” —TeenVogue.com

“The love story's to die for, and the tangled web of relationships will keep readers intrigued to the last page.” —Kirkus Reviews

“Offering the excitement of a crime drama and the allure of forbidden romance, this introduction to a reluctant Godfather-in-the making will pique the interest of dystopia-hungry readers.” —Publishers Weekly