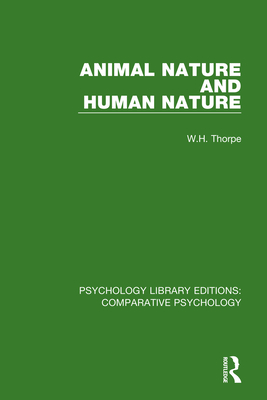 By W. H. Thorpe
This Book Is Not Sold Online - Inquire In Store

Our views on human nature are fundamental to the whole development, indeed the whole future, of human society. Originally published in 1974, Professor Thorpe believed that this was one of the most important and significant topics to which a biologist can address himself, and in this book he attempts a synthetic view of the nature of man and animal based on the five disciplines of physiology, ethology, genetics, psychology and philosophy.

In a masterly survey of the natural order he shows the animal world as part of, yet distinct from, the inanimate world. He then treats aspects of the animal world which approach the human world in behaviour and capabilities, examining simple organisms, communications in vertebrates and invertebrates, innate behaviour versus acquired behaviour, and animal perception. In the second part of the book he deals with those aspects of human nature for which there is no analogy and which constitute man's uniqueness - his consciousness of his past, his awareness of his future and his desire to understand the meaning of his existence.

The primary facts which demonstrate the importance of this book arise from the ever-growing power of man over his environment and his apparent inability to foresee and cope with the dangers of uncontrolled population growth on the one hand and the wildly irrational waste and degradation of the natural resources of the world on the other. Professor Thorpe believes that an immense responsibility lies with literate men of good will, particularly scientists, to convince man that he is the spearhead and custodian of a stupendous evolutionary process. Animal Nature and Human Nature integrates scientific fact with sound theological thought in an attempt to fulfil, in a manner previously impossible Pascal's injunction that: 'It is dangerous to show man too clearly how much he resembles the beast without at the same time showing him his greatness. It is also dangerous to allow him too clear a vision of his greatness without his baseness. It is even more dangerous to leave him in ignorance of both. But it is very profitable to show him both.'