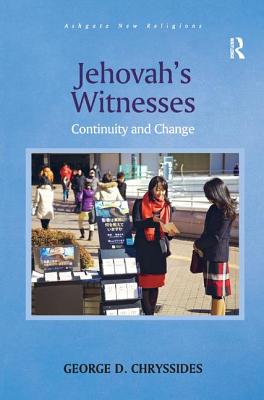 By George D. Chryssides
$54.95
Unavailable, Out of Stock, or Out of Print

From its origins in nineteenth century Adventism until the present day, the Watch Tower Society has become one of the best known but least understood new religious movements. Resisting the tendency to define the movement in terms of the negative, this volume offers an empathetic account of the Jehovah's Witnesses, without defending or seeking to refute their beliefs. George Chryssides critically examines the historical and theological bases of the organization's teachings and practices, and discusses the changes and continuities which have defined it. The book provides a valuable resource for scholars of new religious movements and contemporary religion.

George D. Chryssides is a Visiting Fellow at York St John University, and was previously Head of Religious Studies at the University of Wolverhampton. He has published extensively in scholarly journals and has authored and edited several books including The Path of Buddhism (1988), The Advent of Sun Myung Moon (1991), The Elements of Unitarianism (1998), Exploring New Religions (1999), A Reader in New Religious Movements (co-edited with Margaret Z. Wilkins, 2006), Historical Dictionary of Jehovah's Witnesses (2008), Christianity Today (2010), Heaven's Gate (2011), Christians in the Twenty-First Century (with Margaret Z. Wilkins, 2011), Historical Dictionary of New Religious Movements (2nd edn 2012), The Study of Religion (with Ron Geaves, 2nd edn 2013), and The Bloomsbury Companion to New Religious Movements (with Benjamin E. Zeller, 2014).