The Legitimacy of Modern Democracy: A Study on the Political Thought of Max Weber, Carl Schmitt and Hans Kelsen (Routledge Innovations in Political Theory) (Hardcover) 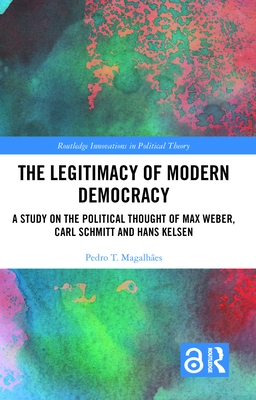 By Pedro T. Magalhães
This Book Is Not Sold Online - Inquire In Store

By re-examining the political thought of Max Weber, Carl Schmitt and Hans Kelsen, this book offers a reflection on the nature of modern democracy and the question of its legitimacy. Pedro T. Magalh es shows that present-day elitist, populist and pluralist accounts of democracy owe, in diverse and often complicated ways, an intellectual debt to the interwar era, German-speaking, scholarly and political controversies on the problem(s) of modern democracy.

A discussion of Weber's ambivalent diagnosis of modernity and his elitist views on democracy, as they were elaborated especially in the 1910s, sets the groundwork for the study. Against that backdrop, Schmitt's interwar political thought is interpreted as a form of neo-authoritarian populism, whereas Kelsen evinces robust, though not entirely unproblematic, pluralist consequences. In the conclusion, the author draws on Claude Lefort's concept of indeterminacy to sketch a potentially more fruitful way than can be gleaned from the interwar German discussions of conceiving the nexus between the elitist, populist and pluralist faces of modern democracy.

The Legitimacy of Modern Democracy will be of interest to political theorists, political philosophers, intellectual historians, theoretically oriented political scientists, and legal scholars working in the subfields of constitutional law and legal theory.

The Open Access version of this book, available at https: //doi.org/10.4324/9781315157566, has been made available under a Creative Commons Attribution-Non Commercial-No Derivatives 4.0 license