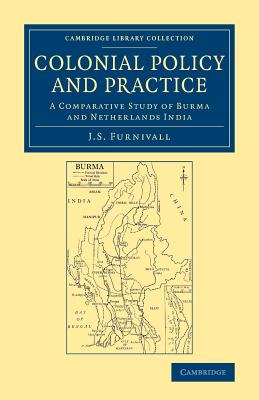 A noted historian of Burma and a founder of the Burma Research Society, John Sydenham Furnivall (1878-1960) supported Burmese independence and freedom from colonial rule. However, he has been considered as Eurocentric and in favour of colonialism, in part because he saw it as a necessary stage in the improvement of certain societies. Stemming from a request in 1942 by the colonial government for Furnivall's views on reconstruction, this influential study was published in 1948. Using the Dutch East Indies as a case study for comparison, Furnivall assesses the effects of the different systems of colonial rule, framed within general surveys of their colonial policies and practices. The book is driven by the goal of consolidating and stabilising Burma's plural society, focusing on the importance of the welfare of the native population. Furnivall's Netherlands India (1939) has also been reissued in the Cambridge Library Collection.