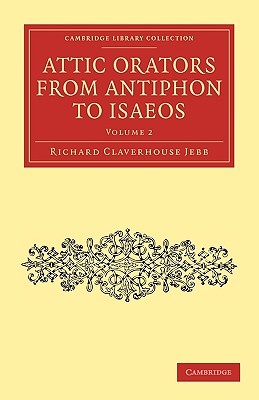 Sir Richard Claverhouse (R. C.) Jebb (1841 1905) was a prominent classical scholar and politician. Jebb was University Orator at Cambridge before becoming Professor of Greek at Glasgow in 1875, and eventually returning to Cambridge as Regius Professor. His many publications include books on Greek oratory, Homer, and modern Greece as well as editions of ancient Greek drama. The two-volume Attic Orators from Antiphon to Isaeos (1876) was written with two primary objectives: to attend to a significant but often neglected element of Greek literature, Attic prose oratory, and to situate that oratory within its social and political contexts. Jebb analyses a number of rhetors from the period before Demosthenes, providing a thorough overview of the genre during this 'best period of Athens'. Volume 2 focuses on the lives, historical contexts, and works of Isokrates and Isaeos before examining the decline and revival of Greek oratory.