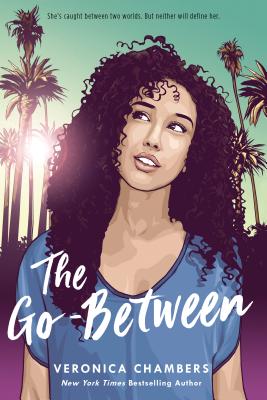 Fans of Jane the Virgin will find much to love about The Go-Between, a coming-of-age novel from bestselling author Veronica Chambers, who with humor and humanity explores issues of identity and belonging in a world that is ever-changing.

She is the envy of every teenage girl in Mexico City. Her mother is a glamorous telenovela actress. Her father is the go-to voice-over talent for blockbuster films. Hers is a world of private planes, chauffeurs, paparazzi and gossip columnists. Meet Camilla del Valle—Cammi to those who know her best.

When Cammi’s mom gets cast in an American television show and the family moves to LA, things change, and quickly. Her mom’s first role is playing a not-so-glamorous maid in a sitcom. Her dad tries to find work but dreams about returning to Mexico. And at the posh, private Polestar Academy, Cammi’s new friends assume she’s a scholarship kid, the daughter of a domestic.

At first Cammi thinks playing along with the stereotypes will be her way of teaching her new friends a lesson. But the more she lies, the more she wonders: Is she only fooling herself?

VERONICA CHAMBERS is a prolific author, best known for her critically acclaimed memoir, Mama’s Girl. She has written more than a dozen books for young people, including Plus and the Amigas series, and has cowritten New York Times bestselling adult memoirs with Robin Roberts, Eric Ripert, Michael Strahan, and Marcus Samuelsson. She also cowrote Samuelsson’s young adult memoir, Make It Messy. Veronica lives with her husband and daughter in Hoboken, New Jersey. Visit her online at veronicachambers.com, and follow her on Twitter at @vvchambers.

"Offers a distinct perspective on the complex and current issue of Mexican immigration to the U.S. . . .a short but rich tale that illuminates the nuanced experience of a girl who, despite her privilege, still grapples with who she is and where she belongs." —Booklist

"There's a well-researched authenticity to the author's descriptions of everything from Mexican culture to couture clothing, but it's the story's exploration of stereotypes that makes it memorable." —Kirkus Reviews