A PLACE TO CALL HOME: THE STORY OF HOW A TV SERIES STIRRED PASSIONS AND CONNECTIONS (Paperback) 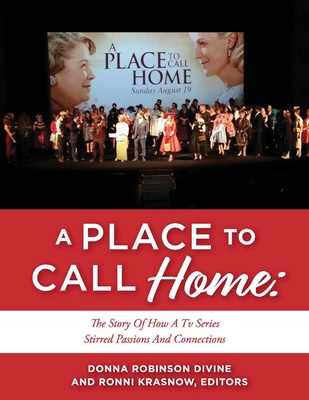 A Place To Call Home begins on a ship when a nurse—Sister Adams by name--works her passage home to Australia to console her mother who is grieving for a son killed in the Korean War. Estranged from her family, she stands before the welcome mat, fearful of what she will find inside and wondering whether her mother will accept her despite a breach of decades. Several minutes into their reunion, the mother tells her daughter to leave because she cannot reconcile with a child, born a Catholic, who is now—a Jew.
On the ship, Sister Adams is asked to care for the matriarch [Elizabeth Bligh] of a wealthy landed family returning to Australia with son and granddaughter as well as with newly wedded grandson and his wife, a marriage intended to blunt his desire for sexual relations with men. Acutely conscious of the privileges bestowed on the Bligh family, matriarch Elizabeth also embraces a set of traditions coiled around a social structure that is expected to ensure stability from the particularly harrowing experiences of a world war exposing country and people to assaults on all fronts including the ones at home.
The encounter between Sarah and Elizabeth reflects the strains and conflicts that hovered over Australia in the years following the traumas of war, their undiminished echo shaping lives and hardening the fault lines. Everyone watching this program knows how the narrative ends for Australia, but few understand what it took to make room in the country for people typically hidden from view or told, in one way or another, that they didn't count for much. The freedoms taken for granted today were won in painful struggles too often measured only as gains without taking a full accounting of losses.
In 1953, Australians lived in the shadow of experiences they could not fully explain: the war to which so many young men and women had gone ended up producing more desolation and grief than peace and comfort. Church and family could not offer adequate explanations for the past nor did they continue to serve as the absolute constituents of destiny given the social and political pressures pushing upward and outward against the constraints of class and circumstance. An open society not only posed dangers to traditional class and culture; it also raised fears about what the forces blowing in the wind would bring or where they would take people and society. Would the emancipatory dreams of the poor and exploited be realized and would they march everyone to the edge of a chaotic precipice? Was a bell tolling for all that Australians believed would last forever? Even as it was on the cusp of extinction, the way of life, portrayed in this series, was ended without the world crashing down, and the story told over the six seasons on television peels back the present to reveal a past that explains why change may be more frightening to think about than to live through.