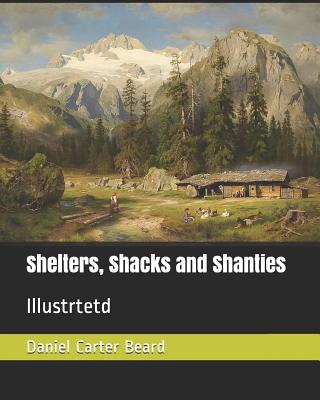 By Daniel Carter Beard
$7.99
Unavailable, Out of Stock, or Out of Print

Originally published in 1914, "Shelters, Shacks and Shanties" presents step-by-step tutelage on all aspects of outdoor accommodation. D. C. Beard explains how to construct a variety of worry-free shelters appropriate to a natural environment that is by turns both friendly and foreboding. Included are a sod house for the lawn, a treetop house, over-water camps, and an American log cabin. Fully recognizing that the Outdoorsman builds a shelter with the intention of inhabiting it, Beard explains how to build hearths and chimneys, notched log ladders, and even how to rig secret locks. Illustrated throughout with instructional line drawings, "Shelters, Shacks and Shanties" harkens back to the can-do spirit of the American frontier and belongs in the knapsack of every modern scout, young and old alike. .............Daniel Carter "Uncle Dan" Beard (June 21, 1850 - June 11, 1941) was an American illustrator, author, youth leader, and social reformer who founded the Sons of Daniel Boone in 1905, which Beard later merged with the Boy Scouts of America (BSA).Early lifeBeard was born in Cincinnati, Ohio, into a family of artists. As a youth, he explored the woods and made sketches of nature. His father was the artist James Henry Beard and his mother was Mary Caroline (Carter) Beard. His uncle was the artist William Holbrook Beard. He lived at 322 East Third Street in Covington, Kentucky near the Licking River, where he learned the stories of Kentucky pioneer life.He started an early career as an engineer and surveyor. He attended art school in New York City. He wrote a series of articles for St. Nicholas Magazine that later formed the basis for The American Boy's Handy Book. He was a member of the Student Art League, where he met and befriended Ernest Thompson Seton in 1883. He illustrated a number of books for Mark Twain, and for other authors such as Ernest Crosby.In 1908 while living in Redding, Connecticut, Beard was among those on hand to welcome Mark Twain upon his arrival to the author's new villa Stormfield.Beard became the editor of Recreation magazine and wrote a monthly column for youth. He founded the Sons of Daniel Boone in 1905, basing it on American frontier traditions. He later moved his column to Woman's Home Companion. After conflicts with a new editor, he moved to the Pictorial Review. Since Women's Home Companion retained the rights to the name, he simply renamed the organization to Boy Pioneers of America.