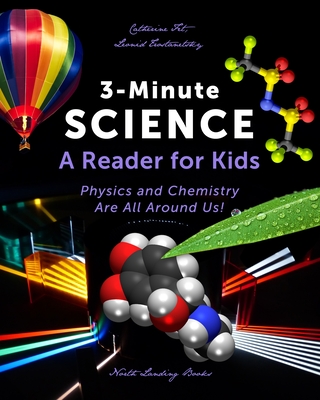 Like many kids his age, my 8-year-old son is fascinated by science. I took him to science 'shows' and lectures for kids on both sides of the Atlantic, and bought him a massive stack of kids' science books. What I noticed is that he was getting lost in the excitement of experiments with test tubes, lightnings, and explosions, and missed the actual science facts behind the flashy lab action. Most science books for young readers are too expansive and systematic for his age, and the books written for elementary school kids are too simplistic.

So I wrote this book with the goal of explaining assorted middle- and high-school-level concepts of physics and chemistry to elementary school kids in a way that lets them easily grasp each idea:

- 2-page bite-size chapters, each focusing on one natural phenomenon

- easy for independent reading from 2nd grade up

Now my son is walking around impressing friends and strangers by randomly divulging science facts, such as the structure and polarity of water molecules, the properties of hydrogen and helium that stem from their atomic weight, and the coherency of a laser beam. Mission accomplished We have shifted our focus from explosions and bubbles to actual science facts.

Why, it's a chemical reaction of hydrogen burning, also called combustion.

Yes, a second-grader is entirely capable of explaining such things to anyone.

Here are the subjects we cover in this book.

Rust and tarnish - oxidation and oxides