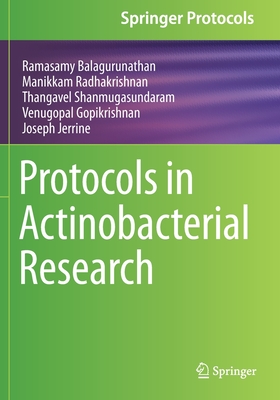 Dr. Ramasamy Balagurunathan has been working for the past three decades exclusively in actinobacteria research for production of bioactive compounds. He has obtained his Doctoral degree in Marine Biology from Annamalai University for his research on bioactive compounds from marine Streptomyces. He pursued his post doctoral research on rare actinobacteria in reputed research Institutes in China and Malaysia. In 2019, he has obtained Doctor of Science degree in Microbiology from Periyar University for his research contribution on Bioprospecting of actinobacteria from rare ecosystems in India. He started his teaching career in 2000. He has handled eleven research projects on actinobacteria worth around Rs. 2.5 Crore. His research team discovered novel anti-TB and anti-HIV molecule from marine Streptomyces sp. R2 and named as "TRANSITMYCIN". He is the Co-inventor in the US & Indian patent filed on Transitmycin. He has isolated Leptomycin - an anti-leptospiral compound from marine actinobacteria. With the goal of developing a centre for collection of actinobacteria from less explored habitats such as marine, desert, forest and mountain ecosystems, presently his team has isolated and are maintaining more than 500 actinobacteria isolated from various extreme environments including Thar desert, Himalayas, western Ghats, rubber forest, Andaman & Nicobar islands, which are the sources for production of antibiotics and other high value products. He has authored 145 publications including research articles, reviews, books, book chapters and magazine articles around the single focused aspect of actinobacteria for various applications like bioactive compound and bio-nanotechnology. He has an H index 19 and I10-index 28. He has guided 80 M. Sc., 25 M. Phil. Projects, 13 Ph.D thesis awarded and is guiding 6 Ph.D., scholars and 1 Post-doctoral fellow.Dr. Manikkam Radhakrishnan is a microbiologist pursuing research on Ecology, Systematics and Bioprospecting of actinobacteria from under studied ecosystems across India for the past two decades. He obtained his Doctoral degree in Microbiology from National Institute for Research in Tuberculosis under University of Madras on "Antitubercular metabolites from Desert soil Streptomyces". After his Post graduation, he started his career as Assistant Professor in Microbiology. He is passionate about research and joined at Centre for Drug Discovery and Development, Sathyabama Institute of Science and Technology in the year 2013. He set up a consortium of >500 actinobacterial cultures under his headship in Bioprospecting division. He has isolated a novel chromopeptide molecule, Transitmycin which is effective against TB and HIV, from a novel marine Streptomyces species R2 isolated from Coral reef ecosystem of South India.. At present he is working on Diversity and Taxonomy of Psychrophilic and psychrotolerant actinobacteria from Indian sector of Southern Ocean (Antarctic). He is participating as the scientific member (Microbiology) in the 11th Indian Scientific Expedition to Southern Ocean. He has authored 110 publications including research articles, reviews, book chapters and magazine articles and has also three patents on actinobacteria to his credit. It is his vision that this gold mine of Actinobacterial resource should be best exploited for the welfare of humans, animals, aquaculture and environmental applications since it has proven therapeutic potential and translational scope. Dr. Thangavel Shanmugasundaram has completed his Masters in Microbiology with gold medal from Periyar University. He has received prestigious INSPIRE fellowship from DST-SERB to pursue his doctoral degree on Exploring magnesite soil actinobacteria for metal and metal alloy nanoparticles for its biomedical and environmental applications. He also received Best Ph.D Thesis award for his meritorious Doctoral thesis. He has published 31 research articles on actinobacteria in high impact. Based on his outstanding publications on actinobacteria and nanotechnology he received DST-National Post doctoral fellowship to work on actinobacteria and its enzymes for nanoparticle synthesis and applications at the DRDO Bharathiar University Centre for Life Sciences, He has a great scientific acumen and aptitude and dedicated research in the field for a decade. Dr. Venugopal Gopikrishnan is working in the field of actinobacterial research for the past 8 years. He obtained his Doctoral degree from Actinobacterial Research Lab, Department of Microbiology, Periyar University. During his doctoral degree, he isolated about 200 actinobacterial cultures from marine and mangrove ecosystems of South India. He has identified Quercetin and Taxifolin two active metabolites from two potential Streptomyces sp PE7 and PM33 which have showed promising antifouling and antimicrobial activity. The active molecules have evidenced good antimicrobial, anti TB and anti-cancer activities. He started his career as scientist in Bioprospecting division of Centre for Drug Discovery and Development at Sathyabama Institute of Science and Technology. At present he is continuing his research on exploring the fish gut associated actinobacteria for quorum sensing inhibitors and antibiofilm compounds. He has published 29 articles including research articles, reviews, book chapters and magazine articles. His aim is to explore the host or symbiotic actinobacteria marine and terrestrial organisms for bioprospecting purposes. Dr. Joseph Jerrine has completed her under graduation with gold medal from St. Ann's College, Visakhapatnam, Andhra University majoring in Biochemistry, Botany and Chemistry. She has done her Masters in Life sciences from Pondicherry Central University. She also cleared GATE 2000 with 98.6 percentile and UGC-NET. She obtained the Doctor of Philosophy from University of Madras in 2011 for her research on Human Pappiloma Virus (HPV) 16 & 18 with respect to cervical cancer. She is the recipient of the ICMR -Senior Research Fellowship for "Establishment of National Database on TB". Further, she has been awarded ICMR-Post Doctoral Fellowship for "Anti TB metabolites from marine Streptomycetes. She has published 40 research articles on actinobacteria and plants with reference to anti TB and other biomedical activities, cancer and asthma. She is recipient of three research projects from central and state funding agencies to work on actinobacteria with special reference to anti TB metabolites. Presently she is working as Scientist D and heading the Centre for Drug Discovery and Development, Sathyabama Institute of Science and Technology, TamilNadu with focused research on bioprospecting of actinobacteria and plants from rare ecosystems in India with reference to anti TB and anti cancer molecules.