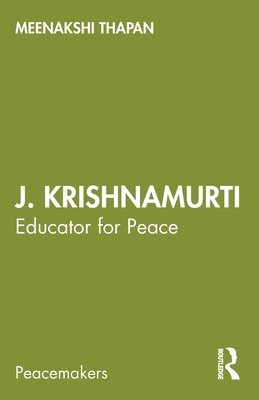 Teacher, thinker, writer, and speaker, J. Krishnamurti (1895-1986) was an Indian educationist, spiritual leader, and key figure in world philosophy. He raised significant questions about the state of the world, about our tendency to remain passive, conditioned, and in a state of overwhelming confusion about how we relate to the world. Through talks and writings spread over many decades and geographical locations, he articulated an unconditioned, reflective approach which emphasised self-inquiry.

This volume provides an understanding of Krishnamurti's views on the human predicament in a disintegrating world, marked by conflict, divisions, wars, and climate change. It also examines his educational thought and its enormous potential for change. Krishnamurti argued that our minds are so conditioned that we are unable to look, listen, or learn without our prior knowledge that foregrounds the role of memory and time. He highlighted the need to work with young children, with a special focus on the school as the centrepiece of his perception for psychological development and educational excellence. It is within an educational setting that Krishnamurti hoped that the seeds for individual and social change will be catalysed.

An introspective look at the life and legacy of an eminent twentieth century thinker, this volume will be of great interest to students and researchers of philosophy, education, religion and spirituality, South Asia studies, modern history, and the social sciences.

Meenakshi Thapan is a trustee of the Krishnamurti Foundation of India and currently the Director of the Rishi Valley Education Centre in rural Andhra Pradesh. She encountered Krishnamurti and his teachings very early in her life, and from then on, has had an ongoing engagement with his educational thought as well as institutions. She taught briefly at the Rishi Valley School and later conducted her doctoral field research within this school community, resulting in the publication of her first book, Life at School: an ethnographic study (1991, 2006, 2nd ed.). Subsequently, she has been a highly accomplished academician, based at the University of Delhi, and held the positions of Professor of Sociology and Director, Delhi School of Economics as well as Head of the D.S. Kothari Centre for Science, Ethics and Education, University of Delhi until her retirement in 2019.Dr. Thapan has travelled widely, teaching, speaking, and contributing to university departments all over the world. She is the recipient of a number of prestigious awards, apart from being the author of numerous books, research papers, and articles in several prominent publications. The most recent are (ed.) J. Krishnamurti and Educational Practice: Social and Moral Vision for Inclusive Education (2018), Education and Society: Themes, Perspectives, Practices (ed.) (2015), Ethnographies of Schooling in Contemporary India (ed.) (2014), and Contested Spaces: Citizenship and Belonging in Contemporary Times (ed.) (2010).