Muslim Women's Writing from Across South and Southeast Asia (Paperback) 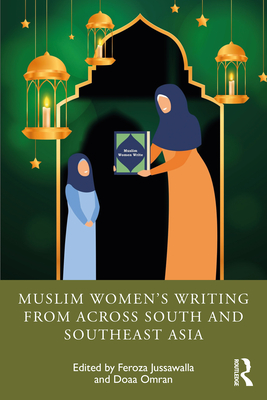 By Feroza Jussawalla (Editor), Doaa Omran (Editor)
This Book Is Not Sold Online - Inquire In Store

This essential collection examines South and Southeast Asian Muslim women's writing and the ways they navigate cultural, political, and controversial boundaries. Providing a global, contemporary collection of essays, this volume uses varied methods of analysis and methodology, including:

- Inclusion of both recognized and lesser-known Muslim authors;

- Division by theme to shed light on geographical and transnational concerns; and

Muslim Women's Writing from across South and Southeast Asia will deliver crucial scholarship for all readers interested in the varied perspectives and comparisons of Southern Asian writing, enabling both students and scholars alike to become better acquainted with the burgeoning field of Muslim women's writing. This timely and challenging volume aims to give voice to the creative women who are frequently overlooked and unheard.

Feroza Jussawalla, Ph.D., University of Utah, 1980, is Professor Emerita at the University of New Mexico in Albuquerque. She has taught at the University level for more than forty years, beginning with her years as a T.A. at the University of Utah, then at the University of Texas at El Paso (1980-2021) and as Full Professor of English and Postcolonial Literatures at the University of New Mexico in Albuquerque, NM, 2001-2021. She is the author of Family Quarrels: Towards a Criticism of Indian Writing in English (Peter Lang, 1984), co-editor of Interviews with Writers of the Postcolonial World, (University Press of Mississippi, 1992), Emerging South Asian Women Writers (Peter Lang, 2017), and Memory, Voice and Identity: Muslim Women's Writing from Across the Middle East (Routledge, 2021). She also edited Mr. Naipaul's interviews given through his career to various newspapers and journals into Conversations with V.S. Naipaul (Mississippi, 1997), which was both translated into French, and featured on Sir Naipaul's Nobel Prize page. She has co-taught an NEH Summer Seminar and an NEH Institute on Postcolonial Literatures housed at the School for Asian and African Studies in London. She has also won prestigious grants such as the Rockefeller Foundation residency in Bellagio, Italy and the Alumni Teaching Award at the University of New Mexico (2014). She is the author of more than three hundred articles and book chapters, primarily on Indian Writing in English, Postcolonial Literatures in English, Indian Critical Theory, D.H. Lawrence and Muslim Women's writing, written from 1979 onward. Her book of poems is Chiffon Saris (2003) published by the Kolkotta Writer's Workshop and the Toronto South Asian Review. She has published several individual poems, most recently on-line with Silver Birch Press https: //silverbirchpress.wordpress.com.Doaa Omran's research interests include postcolonial theory, feminism, and the Middle Ages. She did her master's and PhD at the University of New Mexico. She wrote her ground-breaking dissertation titled Female Hero Mega-Archetypes in the Medieval European Romance (2019) on Quranic and Biblical female characters as mega-archetypes in Medieval literature. Her MA thesis was titled Occidental Encounters: Early Nineteenth-Century Egyptian travelers to Europe (2012). She is currently a visiting lecturer at the same university where she received her master's and doctorate. She received her BA in English language and literature at Alexandria University, Egypt. Her awards include: a Fulbright Scholarship (2007), the Women of Color award at UNM (2012), Dean of Graduate Studies Dissertation Award (2016) and first place in sIdentity: Muslim Women's Writing from across the Middle East. She was also invited by Women Studies: an Interdisciplinary Journal to be Guest co-editor of the special issue Muslim Women Speaking Persistently. Her book chapters include The Woman from Tantoura: An Autotheoretical Reading in the Art of Resistance, Ambivalence in the Poems of the Slave-Knight 'Antarah Ibn Shaddād: An Engagement with Historicism(s), "Muslim Face, White Mask: Out al-Kouloub al-Dimerdashiyyah's Ramza as a Mimic (Wo)man, and Anachronism and Anatopism in the French Vulgate Cycle and the Forging of English Identity through Othering Muslims/Saracens. She is the administrator of the Facebook group CompLitScholars which serves a community of more than 1,000 international researchers.