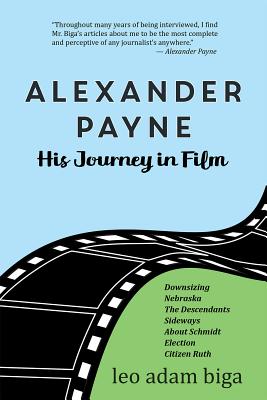 Leo Biga has reported on the career of filmmaker Alexander Payne for 20 years. In this updated collection of essays, the author-journalist-blogger offers the only comprehensive look at Payne's career and creative process. Based in Payne's hometown of Omaha, Nebraska, Biga has been granted access to location shooting for Nebraska and Sideways, the latter filmed in California's wine country. Biga has also been given many exclusive interviews by Payne and his creative collaborators. His insightful analysis of Payne's films and personal journey has been praised by Payne for its "honesty, thoughtfulness, and accuracy." The two-time Oscar-winner calls Biga's articles, "the most complete and perceptive of any journalist's anywhere." Payne's films are celebrated for their blend of humor and honest look at human relationships. Members of Hollywood's A-List, including George Clooney (The Descendants), Jack Nicholson (About Schmidt), Reese Witherspoon (Election), Paul Giamatti (Sideways), Laura Dern (Citizen Ruth), and Bruce Dern (Nebraska), have starred in his films.

Leo Adam Biga is an author, freelance journalist and blogger based in Omaha, Nebraska. In pursuit of his cultural journalism Biga cultivates stories about people, their passions and their magnificent obsessions. His award-winning work appears in many publications. He is available as an expert commentator, public speaker and workshop presenter.