Evolution of Morality and Psychopathology of Evil: An Integral and Evolutionary World View (Hardcover) 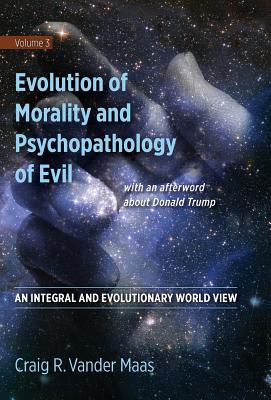 What is morality? Can there be morality without God? Does evil exist, and if so what makes someone evil? Does morality involve absolutes, or is morality relative (meaning that what's considered moral changes with cultures and time periods)? Craig R. Vander Maas addresses these questions and more and presents a model of a "Continuum of Morality" in which evil is presented as psychopathology with significant biological etiologies including contributions from neuroanatomy, neurotransmitters, and genetics. Dr. Vander Maas maintains that what distinguishes moral "good" from the "bad" is degree of selfishness, self-centeredness and greed. It is this self-centeredness that is responsible for the majority of the ongoing problems of the world, including wars, crime, genocides, racism, poverty, lack of clean water in many areas, xenophobia and destruction of the earth.Religion did not really concern itself much with morality until the Axial Age (800 to 200 BCE) in which prophets began preaching the need to care for others as being more important than rituals, sacrifices to God(s), and even strict adherence to laws and rules. The tenets of the Golden Rule developed in various religious traditions. Unfortunately, morality has often not been a primary emphasis in religions. In fact, it is questionable whether religion mostly has been a positive or a negative force in the world. This series, entitled An Integral and Evolutionary World View, advocates for the integration of knowledge from all academic disciplines in order to develop an accurate world view, which the author believes is transpersonal and evolutionary. While science helps us to determine what reality is, it does not address the meaning of reality or how we should live our lives. That, the author believes, should be the purview of religion.