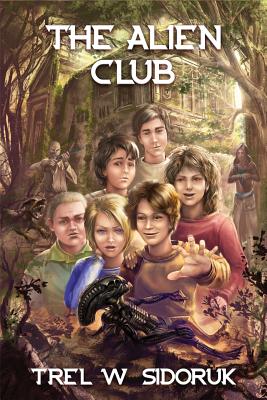 By Trel W. Sidoruk, Aleksandra Klepacka (Illustrator), Lauren Sidoruk (Editor)
$14.99
Unavailable, Out of Stock, or Out of Print

When everything is your first, you're an Alien. The feelings, sensations, decisions and ramifications of your actions are uncharted territory. An alien landscape that stretches from your front door to your first love can be more bizarre, beautiful and unforgiving than any other planet in the Universe.

Growing and nurturing the one organism you're responsible for, you, is vastly more difficult than the aging terrestrial beings claiming to have lived your life say it is. With no handbook and nowhere to turn, you're forced to blaze a path to greatness you're not even sure is your destiny.

A rich tale of love and war, and the interpersonal relationships that forge them both. The Alien Club follows the path forged by a ten-year-old boy, blindly clawing his way through the confusing, frightening and utterly fascinating life afforded him via a magical neighborhood situated in suburbia USA, during the summer of 1979.

The woods of Wilder's are alive with a society and its subsequent undercurrent and underbelly that has the geopolitical landscape rife with factions, friends, fears and fornication. Exploiting new lands and people is as old as Adam and Eve, and the neighborhood of La Rue Drive in Huntington, NY is no different than any other lawless land that came before it.

Wrought with heroism and hilarious happenings, The Alien Club is a truly mesmerizing journey created by a series of tragic and fanciful events that are thrust in to motion by seemingly mundane issues that grip and alter the trajectory of an innocent youth.

The Alien Club is the crossroads of The Goonies, The Outsiders, The Lord of the Flies and Stand by Me (The Body).