Stuff the Accord! Pay Up!: Workers' Resistance to the ALP-ACTU Accord (Paperback) 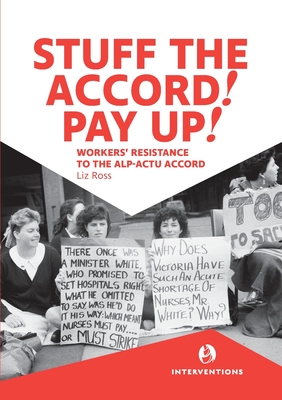 Stuff the Accord Pay Up Workers' resistance to the ALP-ACTU Accord deals with the 1983-1996 ALP-ACTU Accord and outlines how workers fought back against the attacks on their wages and conditions, their jobs, their unions and their rights.

The Accord was a landmark program of restructuring Australian capitalism, a social contract between the union peak body, the Australian Council of Trade Unions and the social democratic Australian Labor Party. Earlier the metal workers union leader Laurie Carmichael proclaimed that the Accord was 'the pathway to socialism'. It was far from that. It pitched worker against worker, destroyed two unions, oversaw one of the greatest transfers of wealth from workers to employers, gutted union membership and the gains of previous decades.

While the Accord is generally portrayed as being welcomed by workers, in truth it was an agreement between the union leadership and the ALP, and many workers angrily resisted the many attacks on them. This story of resistance, from the left and workers' point of view, has not been told in full before. Ross' book, a left wing take on the Accord years, will link the many struggles and the real impact of the Accord on the Australian working class, as well as an analysis of the trade union leadership's role.