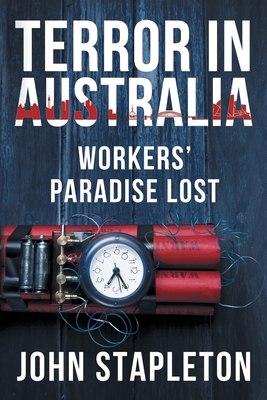 Terror in Australia: Workers' Paradise Lost, by veteran journalist John Stapleton, is a beautifully written snapshot of a pivotal turning point in the history of the so-called Lucky Country. This book is a sidewinding missile into the heart of Australian hypocrisy. In 2015 there were well attended Reclaim Australia demonstrations in every major capital city, all protesting what the demonstrators saw as the growing Islamisation of Australia, along with countering anti-racism demonstrations. There were frequent violent clashes, hundreds of police were forced to form lines separating the demonstrators in Sydney and Melbourne, there were a significant number of arrests and injuries, and dozens of people were treated for the effects of capsicum spray. The terror alert was at its highest level ever, the country was engaged in an unpopular and discredited war in Iraq and Syria, and relations between the government and an increasingly radicalised Muslim minority had broken down. Despite the billions being spent on national security, authorities believed another terrorist attack was inevitable. A demoralised population, saddled with a history of grotesque overregulation, turned inwards, increasingly questioning the failed social creeds of the past. On the streets once vibrant entertainment districts were desolate, while closed and shuttered shops became a characteristic of many suburbs. An optimistic, freedom loving country with an irreverent, larrikin culture and a wildly optimistic view of its place in the world lost faith in its own story. Well documented, switching through multiple points of view, Terror in Australia: Workers' Paradise Lost is a sometimes frightening, sometimes intensely lyrical step inside a democracy in serious trouble.