Superannuation Can Be Murder (Paperback) 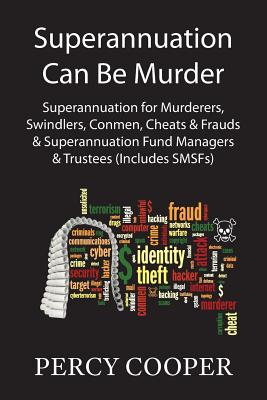 Twenty chapters, each is a different but complete story of crime, actual and attempted, within the superannuation industry. Contains elements of biography of the author as a General Manager, Trustee and Consultant to several of Australia's top superannuation funds and later as an Investigator. Chapters relate how murderers sought to claim the superannuation of victims, an attempt by a "widow" to claim a death benefit for a still alive husband and an opportunistic couple and their teenage daughters who colluded to bury a "spare" corpse. Attempts by contributors to fraudulently obtain total and permanent disability benefits with forged medical documents are disclosed as is the humorous method employed by a doctor to reveal the ploy of a swindler and the coercion inflicted by a Manager to obtain a resignation from a would-be swindler. Fates of frauds involving ingestion of substances to imitate serious cardiac conditions are aired. Details how psychiatric disability was abused by a contributor and his Psychiatrist mistress to manipulate sections of the medical and legal professions to rip off several superannuation funds. Murder by axe, poison and the "accidental" discharge of five bullets from a .303 rifle into the back of an inconvenient husband by a violent woman make fascinating reading. Persecutions of superannuation fund managers are featured, one in particular being at diplomatic level. A "Royal" who was conman scum and tales of tainted Trustees of similar ilk are eye-openers. The scale of defrauding of super funds by conmen with dodgy investments and embezzling employees are sure to cause unease, particularly the thefts of millions of unrecoverable dollars by dozens of swindlers from SMSFs. How a super employee got away with millions from a bank employees fund and the $150 million attempted fraud by a gang of criminals that came so close to success. This book is a fascinating and totally engrossing, entirely different, aspect of the superannuation industry. Superannuation is Australia's most massive, highly profitable and hence highly competitive industry. The industry fears any exposure of its weaknesses. This is the book the industry dreads. About the Author: Percy Cooper is a semi-retired Melbourne author. In his civilian career he had over 40 years as General Manager, Trustee or Consultant to Australia's top government, semi-government and industry superannuation funds, with over 15 years as a Councillor of the Victorian Division of the industry's peak body, the Association of Superannuation Funds of Australia (ASFA). In the wider field of business, he served as a Director of a Bank, a Motel Chain, and a joint semi-government / Bank multimillion dollar property trust and was Chairman of an ASX listed property development company. As a licensed Private Inquiry Agent he draws on decades of experience to detect and resolve, mainly by common sense negotiation, "irregularities" within the superannuation industry. Restitution before retribution is his strength. Parallel with his business career, he served as an Officer in the Australian Army Reserve rising from a humble National Serviceman to Officer Rank and receiving the ED (Efficiency Decoration). His last posting was that of Divisional Artillery Intelligence Officer for the Third Division. The author's qualifications and vast experience make him the only person capable of writing this unique book.