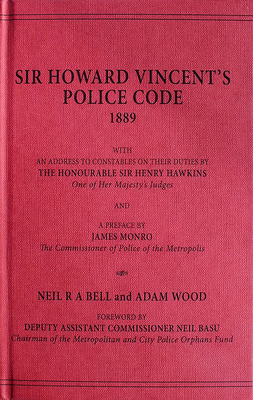 Howard Vincent's Police Code, 1889 is a republishing of the famous guide for Metropolitan Police of the Victorian era, with an extensive introduction by Neil Bell and Adam Wood. The Police Code was compiled by Howard Vincent, Director of the CID, and first published in 1881. It was an invaluable resource to Metropolitan Police officers and was updated regularly over the next 50 years. The version being reprinted is for 1889, written in 1888 and in use by officers at the time of the Whitechapel murders. Over 200 pages, Howard Vincent carefully described in simple terms the legality of more than 900 incidents which might occur in the daily life of a police officer, from baby farming and wandering lunatics to illegal burials and the identification of prisoners. Originally, a share of proceeds from sales were donated to the Metropolitan and City Police Orphanage, and we are proud to announce that we will continue this tradition by donating an equal share of profits to the Metropolitan and City Police Orphans Fund - every copy sold therefore contributes to the Orphans Fund.

Neil R A Bell is a respected police historian, and is the author of Capturing Jack the Ripper: In the Boots of a Bobby in Victorian London and co-author of The A-Z of Victorian Crime. Adam Wood is Executive Editor of Ripperologist magazine, the leading periodical on the Jack the Ripper case, and also Editor of The Police History Society Journal.