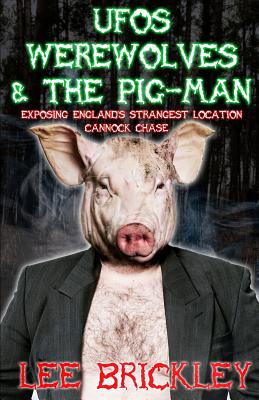 The eternally mysterious woodlands of Cannock Chase in Staffordshire, England are known throughout the world as an entry point for bizarre and unearthly, paranormal phenomena. From werewolf sightings and spectral encounters, to documented UFO crashes, spooky urban legends, and black eyed kids, this supernatural portal area experiences more inexplicable activity than you even dare imagine.

In this book, Lee Brickley chronicles his investigation into the very location many researchers call "England's Strangest". With brand new sighting reports, spine tingling tales of gruesome monsters, and fresh information on the alleged top secret military connection that could be responsible for it all.

Are you brave enough to find out what's really going down in the woods today?

"Cannock Chase has long been known as a UFO hotspot and a place where all sorts of other paranormal phenomena have occurred. It's one of the UK's most mysterious locations and might even get into a global Top 10 list of spooky sites, alongside such places as Area 51, Roswell, the Bermuda Triangle and a few others." - Nick Pope, MoD UFO Project, 1991-1994

"A high plateau bordered by the Trent Valley to the north and the West Midlands to the south, the huge and picturesque Cannock Chase has been an integral feature of the Staffordshire landscape for generations. There is something deeply weird about the Chase: it has strange and monstrous inhabitants in its midst. Werewolves, large black cats, aliens, spooks and spirits, Bigfoot, wallabies, wild boar, and huge snakes have all been reported from within the depths of these mysterious woods..." - Nick Redfern, author of many books including Monster Diary and Wildman

"UFOs, werewolves, orbs, more monsters than an old Universal Studio film. Cannock Chase has them all, and now Lee Brickley is bringing them all into your living room in his exciting new book." - Brad Steiger, author of hundreds of best selling paranormal books.

Lee Brickley is a paranormal/UFO researcher, cryptozoologist, author and publisher from the West Midlands, UK. For the last seven years Lee has studied deep geopolitics and paranormal/extraterrestrial phenomena, conducting numerous interviews whilst also writing articles and book reviews to much acclaim. You can find out more about Lee at his blog: Paranormal Cannock Chase