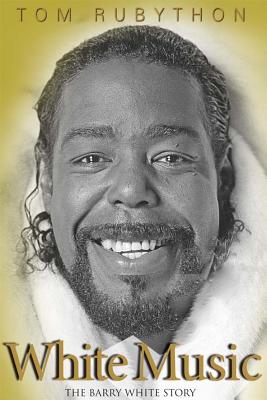 By Tom Rubython
$29.95
Unavailable, Out of Stock, or Out of Print

White Music is the first full length biography of the maestro, Barry White. White was born in Galveston in 1944. Melvin White, Barry's father, was already married with two children of his own; something of which his mother Sadie Carter had no knowledge. Sadie and baby Barry soon returned to Los Angeles where a brother Darryl joined the family 16 months later. She and her two sons made the best of their lives and lived happily in the Watts area of Los Angeles. As soon as he could walk and talk Barry displayed a musical bent, while Darryl became a young thug, terrorising the neighbours. Sadie bought a piano, then a gramophone to help her son develop. He dazzled the church choir with his talents and was running it by the age of 12. Barry's life changed forever when his voice broke at 14. And from that moment, armed with a voice like no one else on the planet, he began a 15-year struggle to make it as a professional musician. Along the way he went to prison, got married, fathered five children and got divorced. Then he met his second wife Glodean and suddenly the path forward became clear. His first hit record was for his girl band, Love Unlimited. It was called Walking In The Rain With The One I Love. It was the song that made Barry White. His solo career took off after he got together with arranger, Gene Page and recorded an album called I've Got So Much To Give followed by Stone Gon' and Can't Get Enough. The albums made Barry White an international star and gave him the hit single that defined his life - You're The First, The Last, My Everything. For the next five years Barry White produced hit album after hit album for himself, Love Unlimited and the Love Unlimited Orchestra establishing him as one of the greats of music. He continued to perform around the world playing to huge audiences until his death in 2003 at the age of 58.

White Music is Tom Rubython's first biography of a musician, but he felt uniquely qualified to undertake the task as he has been a Barry White fan from the age of 17 when White first burst onto the music scene. He has bought all of his albums over the years, first as cassettes, then CDs and finally iTunes. During the process of this book he listened again and again to every track Barry White ever wrote, produced or sung so that he could make sense of his life. He wanted to make sure that he wrote a complete biography that covered every facet of the maestro's life as well as all of his music. Rubython is a former magazine and newspaper editor spanning the worlds of sport and business. For over 30 years he worked in business magazines editing, amongst others, BusinessAge, EuroBusiness and Spectator Business. Then he moved to sport, editing F1 Magazine, BusinessF1 and SportsPro before becoming a full-time biography writer. He wrote his first book in 1995, and there have been more than 20 since. He is best known for his motor racing biographies including Life of Senna, which has sold more than 250,000 copies across the world, and Shunt, the story of James Hunt, which has sold more than 70,000 copies. He also wrote And God Created Burton, the story of the life of Richard Burton, and Boy Plunger, the biography of legendary share trader Jesse Livermore. Rubython specialises in non-fiction storytelling and is passionate and methodical about the process of writing and researching the definitive biography. He starts with a determination to tell the full story of a person's life, emphasising what is important and de-emphasising what is not, the two skills he believes are the crucial tools of any biographer.