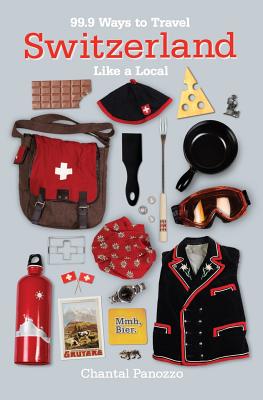 When most people think of Switzerland, they think of cheese, chocolate, and Alpine skiing. Little do they think of breweries-turned spas, summer sledding, and blazing springtime snowmen. But the chance to witness a burning snowman (not to mention grill a sausage in its embers) is one of the many reasons to forget sweet little Heidi and explore the Swisser side of Switzerland.

99.9 Ways to Travel Switzerland Like a Local is one part travel book, one part culture guide, and total bucket list enjoyment. It allows readers to say adieu to Lucerne and allegra to the place the Swiss voted most beautiful. It encourages souvenir shoppers to cut the Swiss army knife from their list and replace it with a rubber messenger bag. And it gives tourists the inspiration they need to stop following umbrella-toting tour guides (or books that act like them) and start following 320,000 well-dressed Swiss cows instead.

Whether the reader is a vacationer rethinking their version of touring, an expatriate who wants to get to know their adopted country on a deeper level, or even if they're Swiss-99.9 Ways to Travel Switzerland Like a Local is for anyone who believes that the best travel stories come from a desire not just to take a snapshot of a place from a train window, but to stop, smile, and disembark for a while in order to bring the meaning of that blurry photo into sharper focus.

This version of the book features 69 black and white photographs of Switzerland.

About the author: Chantal Panozzo spent almost a decade in the land of cheese, chocolate, and people who can pronounce her name. She has written about Switzerland for The New York Times, Wall Street Journal, Christian Science Monitor, Salon, Vox, CNN Travel, CNN Business Traveler, Fodor's, Die Zeit, and many others. Her collection of personal essays, Swiss Life: 30 Things I Wish I'd Known, landed her on the cover of the highly esteemed Swiss tabloid Blick am Abend as the American who saved Switzerland's honor. She is hoping the sequel, American Life: 30 Things I Wish I'd Known, will do the same thing for the U.S. because it could really use someone to save its honor too. In the meantime, she would like to remind everyone that you'll find amazing things to do in canton Aargau, the Chicago suburbs, and everywhere in between.