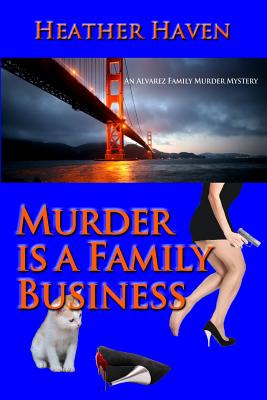 This is book number 1 in the Alvarez Family Murder Mysteries series.

Just because a man cheats on his wife and makes Danny DeVito look tall, dark and handsome, is that any reason to kill him? The reluctant and quirky PI, Lee Alvarez, doesn't think so. The 34-year old, half Latina, half WASP and one-hundred percent detective has her work cut out for her when the man is murdered on her watch. Of all the nerve. Murder is a Family Business is the first in a series of humorous mysteries revolving around Lee Alvarez, a combination of Sue Grafton's Kinsey Millhone and Janet Evanovitch' Stephanie Plum, and the rest of Alvarez Family. Completing the family is Lee's "Never-Had-A-Bad-Hair-Day" aristocratic mother, Lila; computer genius brother, Richard; beloved uncle "Tio;" and her energetic orange and white kitten, Tugger. When this group is not solving murders, they run Discretionary Inquiries, a successful Silicon Valley agency that normally deals with the theft of computer software. Seemingly light and frothy on the surface, the novel explores familial love: the good, the bad and the annoying.

After studying drama at the University of Miami in Florida, Heather went to Manhattan to pursue a career. There she wrote short stories, novels, comedy acts, television treatments, ad copy, commercials, and two one-act plays, which were produced at several places, including Playwrights Horizon. Once, she even ghostwrote a book on how to run an employment agency. She was unemployed at the time. One of her first paying jobs was writing a love story for a book published by Bantam called Moments of Love. She had a deadline of one week but promptly came down with the flu. Heather wrote "The Sands of Time" with a raging temperature, and delivered some pretty hot stuff because of it. Her stint at New York City's No Soap Radio - where she wrote comedic ad copy - helped develop her long-time love affair with comedy. Her first novel of the Alvarez Family Murder Mysteries, Murder is a Family Business, won the Single Titles Reviewers' Choice Award 2011, and the second, A Wedding to Die For, received the 2012 finalist nods from both Global and EPIC for Best eBook Mystery of the Year. The third of the series, Death Runs in the Family, has already received rave reviews. Stand-alone noir mystery, Death of a Clown, is steeped in Heather's family history. She is the daughter of real-life Ringling Brothers and Barnum and Bailey Circus folk. Her mother was a trapeze artist/performer and father, an elephant trainer. Heather brings the daily existence of the Big Top to life during World War II, embellished by her own murderous imagination. Death of a Clown is published by The Wives of Bath Press, March 1, 2013

"Heather Haven makes a stellar debut in Murder is a Family Business. Liana (Lee)Alvarez is a tough, yet sensitive PI who works for her family's business-a high tech PI firm in the heart of Silicon Valley. When Lee stumbles onto a murder in a warehouse at San Francisco's Fisherman's Wharf, she calls upon her family--a blue blood mother, a computer-genius brother, and a good-hearted uncle--to solve the case. With an engaging protagonist and a colorful cast, Haven provides a fresh voice in a crowded genre.We will be hearing more from this talented newcomer. Highly recommended."