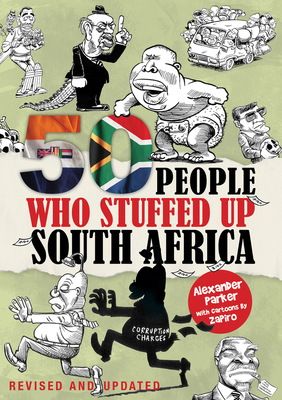 By Alexander Parker, Zapiro (Illustrator)
$20.95
Unavailable, Out of Stock, or Out of Print

Part history and part social commentary, 50 People Who Stuffed Up South Africa is an engrossing and edifying read that delves into South African politics, war, sport, and culture on its way to answering the question, Who are the greatest villains, the direst leaders, the foulest corrupters, and the most offensive personalities to have spread their regrettable influence throughout the land? From Jan van Riebeeck in 1652 to Jacob Zuma in 2012—via Wouter Basson, P. W. Botha, Shaka, and Schabir Shaik—the book focuses on men (and three women) of infamy who jeopardized the nation by virtue of their ruinous megalomania (Thabo Mbeki, Cecil Rhodes), foul convictions (Hendrik Verwoerd, Eugène Terre’Blanche), or, in the author’s opinion, general idiocy (Julius Malema, Alec Erwin). Beyond the obvious political manipulators and historical figures, however, this collection also includes statesmen and sportsmen of dubious distinction, as well as nonpareil social delinquents such as minibus taxi drivers.

Alexander Parker is the motor industries editor for Business Day newspaper. A journalist, his work appears regularly in a number of South African newspapers and magazines. He is the author of 25 Cars to Drive Before You Die and 50 Flippen Brilliant South Africans. Zapiro is the penname of Jonathan Shapiro, South Africa’s leading political cartoonist. He is the editorial cartoonist for the Mail & Guardian, the Sunday Times, and the Times, and the author of But Will It Stand Up in Court?, Do You Know Who I Am?!, Don’t Mess with the President’s Head, and Pirates of Polokwane. He is the recipient of numerous awards, including the International Publishers Association Freedom to Publish Prize, the Media Institute of Southern Africa Press Freedom Award, the Mondi Shanduka Newspaper award for Graphic Journalism, and the Vodacom Cartoonist of the Year award.