Improvisation at the Speed of Life: The TJ and Dave Book (Paperback) 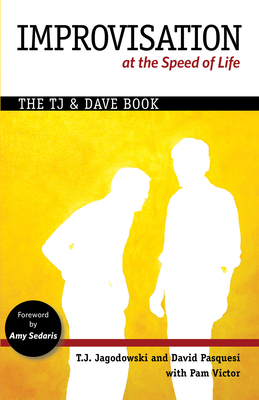 T.J. and David are internationally known, award-winning, master improvisers from Chicago's legendary scene. This in-depth look at the techniques, principles, theory and ideas behind what they do is both authoritative and entertaining. Since their early years playing the iO (formerly Improv Olympic) and the Second City mainstage theater (where David won a Joseph Jefferson award for best actor in a revue), TJ and Dave have been performing for over fifty years combined - fifteen as a team. David worked with improvisation guru Del Close, in development of the The Harold, the preeminent longform theatrical structure, and both are multi-award winning actors.

Steven Colbert says, "One of these guys is the best improviser in the world. And the other one is better."

Other endorsements: The New York Times says they are "the premier improv duo working today," while Time Out New York wrote of their long-running TJ and Dave show: "BRILLIANT, HEARTBREAKING, MIND-BLOWING, INSPIRING! The best 50 minutes of improv comedy we've ever seen ....DRINK THEIR KOOL-AID."

TJ Jagodowski began improvising in the mid-1990s. He has been a member of The Second City as well as a performer and teacher at iO (formerly ImprovOlympic) and The Annoyance theaters. TV and film credits include Sonic ads, Stranger Than Fiction, The Ice Harvest, The Great and Powerful Oz, Prison Break, and Get Hard. TJ is co-founder and co-artistic director of Chicago's Mission Theater. David Pasquesi has been improvising since the early 1980s. He studied with Del Close for years and was on one of the original Harold teams at ImprovOlympic (now iO). David wrote and performed four reviews at The Second City (Chicago) where he received a Joseph Jefferson Award for Best Actor in a Review. He has played Steppenwolf and the Goodman theaters, and his many film and TV credits include VEEP, Strangers with Candy, Boss, Angels and Deamons, and the Ice Harvest. He is co-founder and co-director of The Mission Theater in Chicago. Pam Victor is the founding member of the Ha-Ha's, and produced The Happier Valley Comedy Show in western Massachusetts. Pam performs Geeking Out with: The Talk Show, a live version of the written interview series, at comedy festivals throughout the land. Pam writes mostly humorous, mostly true essays and reviews of books, movies, and tea on her blog "My Nephew is a Poodle."