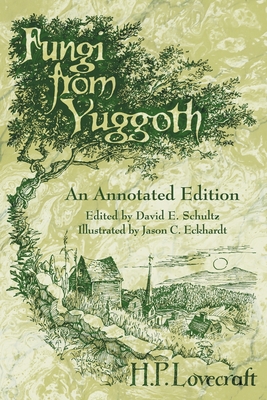 H. P. Lovecraft's Fungi from Yuggoth is a remarkable achievement. Written in little more than a week (December 27, 1929-January 4, 1930), the cycle of 36 sonnets is a compact encapsulation of the essence of Lovecraft's imaginative vision. Its central motifs-the lure of hidden worlds, cosmic alienation, the terrors lurking behind the placid surface of life-are those that structured Lovecraft's greatest weird tales.

David E. Schultz has spent decades preparing this annotated edition of the Fungi. He discusses the origin of the poem (including the influence of Donald Wandrei's similar cycle, Sonnets of the Midnight Hours), its connections with Lovecraft's fiction, Lovecraft's changing thoughts on natural expression in poetry, and the complex history of the poem's publication-both as individual sonnets and as a unity. Schultz also provides penetrating annotations on every poem.

This volume features the superlative artwork of longtime Lovecraftian artist Jason C. Eckhardt, who has produced a poignant cover perhaps more Lovecraftian than most seen of late, and illustrated each poem in a separate full-page edition. Readers are also treated to a reproduction of Lovecraft's handwritten manuscript of the Fungi, which shows how carefully he revised each sonnet in the course of composition, and Harold S. Farnese's sheet music for two of the sonnets, most of it never published previously.

This edition takes its place as a landmark contribution to Lovecraft studies-one that allows readers to appreciate Lovecraft's most famous poem as never before.