The Betrayal of the Self: The Fear of Autonomy in Men and Women (Paperback) 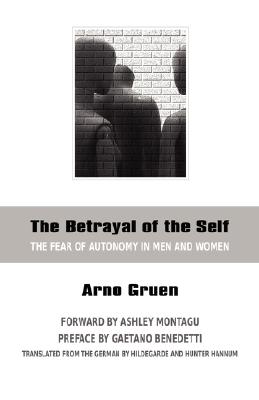 Love or power ? these are the opposing poles of a choice every child is compelled to make, very early in its life, in a drama that sets it irrevocably on its path through life. This startling new insight into a formative experience fundamental to our development is the subject of THE BETRAYAL OF THE SELF, Dr. Arno Gruen's passionately argued contribution to the psychoanalytic view of the human soul, and what distorts it into pathology. What happens to an infant when it learns that the love it craves from its parents is available only at the price of submission to their will? In paying this price, as Dr. Gruen found in many years of experience with his patients, the infant renounces its true, autonomous self and instead embarks on a search for power with which to manipulate the world around it-a quest that will henceforth rule its life. Dr. Gruen maps out the process by which this striving for power, once the fatal choice has been made, masks the child's inner emptiness, dulls its fears, and soothes its secret feelings of self-loathing. Its need for power soon bars all access to its real emotions, and corrupts all of its relationships into ones based on mastery and domination. The power-oriented world around it, which puts a premium on stoic "strength" and "invulnerability," further confirms the child in this pursuit of power, leading it on to a path of dehumanization which pervades our entire society. Thus human destructiveness and evil are not innate, but develop in a complex process of growth marked by the failure to attain autonomy. In contrast, Dr. Gruen defines autonomy as that state of integration in which we live in full harmony with our feelings and needs. It is a natural state of being experienced in early childhood when the infant is loved unconditionally and without the need to earn this love by the self-sacrifice of submission. It allows the child to remain vulnerable to feelings of self-doubt, helplessness, pain, and rage ? the very emotions the infant fearfully flees in its decision to betray its own self. The fear of these emotions, Dr. Gruen shows, alienates the male in particular, destroying his soul, depriving him of his ability to love, and imposing on him the need to oppress others, women especially. How can therapy help the patient to find the way back to health and his autonomous self? Dr. Gruen discovered the clue to the therapeutic process in the active role the patient originally played in his choice between love and power, when he took refuge in power in his flight from pain. The therapist's task in helping the patient is to teach him how to accept the vulnerability he once feared in order to recover his lost autonomy. By defining man's vulnerability as his strength, Dr. Gruen points the way to a psychoanalysis of personal courage and social responsibility. At the same time, by exposing the childhood split which leads man to abandon his true self, Gruen has written a powerful indictment of our modern culture which mirrors the individual's self-alienation in growing social violence and loss of humanity. DR. ARNO GRUEN, who was born in Germany, emigrated to the U.S. as a child in 1936. He received his psychoanalytic training at New York University, and held many teaching posts in the United States, including seventeen years as professor of psychology at Rutgers University. Since 1979 he has lived and practiced in Switzerland. He is the author of many books and papers in both German and English. His other major work available in English is his 1992 book, THE INSANITY OF NORMALITY: TOWARD UNDERSTANDING HUMAN DESTRUCTIVENESS (republished in 2007 by Human Development Books).