The Insanity of Normality: Toward Understanding Human Destructiveness (Paperback) 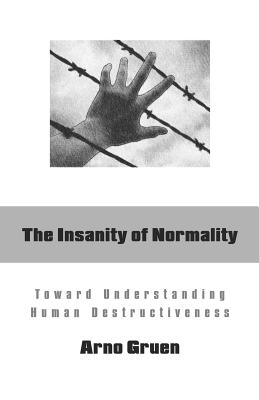 THE INSANITY OF NORMALITY: TOWARD UNDERSTANDING HUMAN DESTRUCTIVENESS by ARNO GRUEN According to Sigmund Freud, man is born with an innate tendency to destruction and violence; in THE INSANITY OF NORMALITY, the psychoanalyst Arno Gruen challenges that assumption, arguing instead that at the root of evil lies self-hatred, a rage originating in a self-betrayal that begins in childhood, when autonomy is surrendered in exchange for the "love" of those who wield power over us. To share in that subjugating power, we create a false self, an image of ourselves that springs from a powerful and deep-seated sense of fear. Gruen traces this pattern of adaptation and smoldering rebellion through a number of case studies, sociological phenomena - from Nazism to Reaganomics - and literary works. The insanity this attitude produces, unfortunately, goes widely unrecognized precisely because it has become the "realism" that modern society inculcates into its members. Gruen warns, however, that escape from this pattern lies not simply in rebellion, for the rebel remains emotionally tied to the object of his rebellion, but in the development of a personal autonomy. His elegant and far-reaching conclusion is that while autonomy is not easily attained, its absence proves catastrophic to both individual and society. "With compassion and conviction Dr. Gruen carefully exposes the undiagnosed and undisclosed insanity unwittingly accepted as normality... This is a text for leaders and followers, for conformists and rebels alike, for members of the healing professions who seek to repair the destructive fallout from our pursuit of normality and for all who strive for a more compassionate and saner social order." -Montague Ullman, M.D. DR. ARNO GRUEN was born in Germany and emigrated to the United States as a child in 1936. After completing his graduate studies in psychology at New York University, he trained in psychoanalysis under Theodor Reik. Dr. Gruen has held many teaching posts in this country, including seventeen years as professor of psychology at Rutgers University. Since 1979 he has lived and practiced in Switzerland. His groundbreaking first book, THE BETRAYAL OF THE SELF, was published by in 1988. THE INSANITY OF NORMALITY was first published in Germany by K sel Verlag under the title Der Wahnsinn der Normalit t-Realismus als Krankheit: eine grundlegende Theorie zur menschlichen Destruktivit t. The book was first published in English in 1992.