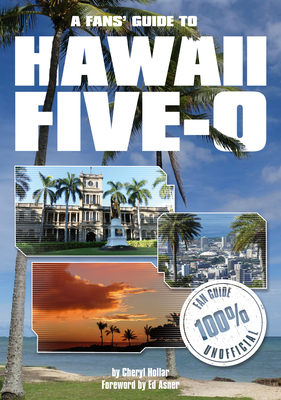 This unofficial book for the fans takes a first-ever look behind the camera with directors and writers of the original and reboot Hawaii Five-0.

Take a walk with author Cheryl Hollar from the beginning of the original Hawaii Five-0 series right through to the immensely successful re-boot. Discover how it all began back in 1968. Read how Sunset on the Beach started, and why Jack Lord promoted the original series as no publicist ever could. Read about the private Jack Lord in the words of his personal assistant. Find out why it takes eight days to film one episode of the new series and how the success of the 2010 re-boot surpassed everyone’s expectations.

This book gives Hawaii Five-0 fans an up-close look at the action through conversations with crew and actors of both past and current series.

If you love Hawaii Five-0, you will love this book!

Cheryl Hollar is a freelance writer for the entertainment industry and covers everything from the TCA’s to red-carpet events to set visits to celebrity charities. Her work includes coverage of Mark Harmon’s Annual Charity Baseball event helping the children of Oklahoma as well as a series of pieces on the impact television has on changing people’s lives through organ donation. Cheryl has also been commissioned to write pieces for an LA group of family magazines, including specialneeds.com and familychoiceawards.com.  Currently a contributing writer at mytakeontv.com, Cheryl holds a Certificate in Writing for Television from UCLA’s Writers’ Extension Program. She is no stranger to the industry, having worked in public relations in New York City for Rogers & Cowan and Bon Jovi Productions (McGhee Entertainment). Cheryl is a member of the Christian Women in Media Association and the Hollywood Prayer Network. She is also a member of the International Twins Association, where she has served as President and/or Vice-President with her twin sister at conventions across the United States.  Cheryl loves animals, traveling, writing, and meeting new people.