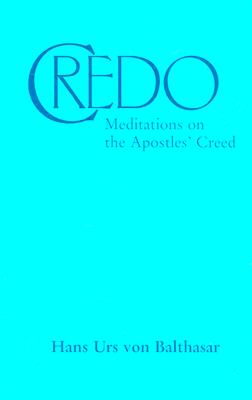 In the twelve months before his sudden death, Hans Urs von Balthasar had been writing a series of reflections on the twelve articles of the Apostles' Creed. These texts, which are undoubtedly among the last things he wrote, take on the character of a legacy, a spiritual testament. For they amount in their extraordinary compactness and depth to a little "summa" of his theology. What he had set out in detail in numerous books over five decades, he summarizes here in contemplative plainness and simplicity.

All the characteristics that make von Balthasar's work so distinctive and valuable are to be found here: breadth of vision, loveliness of style, and an intuitive-contemporary passion that allows him to "pray intellectually and think 'cordially'."

In his warm and extensive introduction to the book, Medard Kehl speaks of von Balthasar's "unclouded, almost childlike joy in the richness and beauty of the Mystery" of the threefold God, which "is evidenced in his interpretation of the creed."

Hans Urs von Balthasar (1905–1988) was a Swiss theologian widely regarded as one of the greatest theologians and spiritual writers of modern times. Named a cardinal by Pope John Paul II, he died shortly before being formally inducted into the College of Cardinals. He wrote over one hundred books, including Prayer, Heart of the World, Mary for Today, Love Alone Is Credible, Mysterium Paschale and his major multi-volume theological works: The Glory of the Lord, Theo-Drama and Theo-Logic.